Why am I paying for the BBC to run fake news just because it is institutionally anti-Israel?

I could just about accept the poll tax that is the BBC license fee if I was served a diet of high quality non news, as Lord Reith desired, and full impartial news. But in fact my license fee goes on paying idiots such as the tax dodging, virtue signalling, fraudsters pal Gary Lineker seven figure salaries to front up crap. And as for the news?

On BBC World about ten times a day we have an advert fronted by Katty Kay in which she boasts of how the BBC never takes sides in any war, election or dispute and that makes it the most trusted brand in world news. Does the silly woman believe that pap or is she being ironic?

Er.... well what actually happened was that three Palestinian men pulled out knives and started attacking anyone they could find - all they wanted to do was kill Jews. A number of civilians were injured and a 23 year old female cop was stabbed to death. To end this rampage other cops shot the terrorists and killed them.

Their families will now receive a mega "pension" from the Hamas run authority in Gaza, a body that is heavily funded by EU money. What's not to like? They are set up for life and we EU taxpayers get to fund it. Great.

Does this incident ring any bells? Did the BBC run the headline "Three muslims killed after deadly stabbing in Borough Market". It did not but the facts are broadly the same. The only difference is that Israeli cops carry guns so the death toll was much lower in Jerusalem than it was in London.

How can this headline be seen as anything other than misleading? Wherever you stand on this conflict surely you find something Orwellian in the reporting of the state funded broadcaster? The BBC gave up on showing any balance in its coverage of Israel ages ago. The BBC was slammed by watchdogs for its lack of balance on Brexit. Donald Trump got it right in calling the BBC out as a fake news channel.

I make no secret of the fact that I stand with Israel. So for me to be forced to pay for these lies is something that I find personally offensive. Let us hope that the DUP sticks to its manifesto pledge and as part of a deal with the pathetic Tories, forces Mrs May to slash state funding for this shameless propaganda and for the ghastly Lineker once and for all. 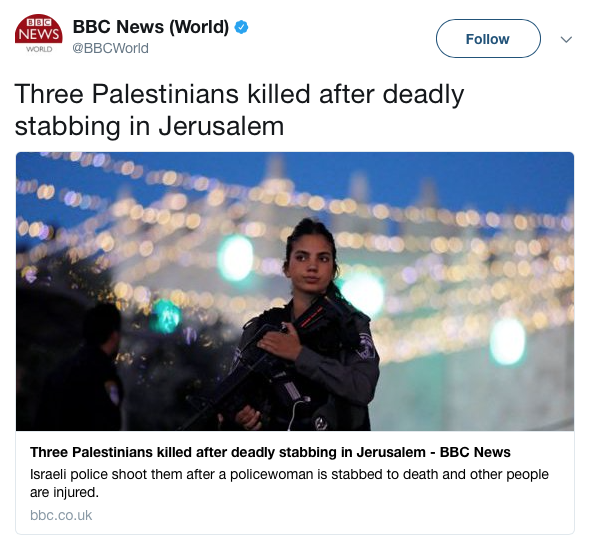