As you can see in a tweet below from a regional organiser of the UNITE Trades Union, which bankrolls Labour, the vicious Tories are at it again, trying to raise the pension age. This is all because Tories hate those who are not so rich that they do not need a state pension. So bangs on the left in a post fact era chorus. So what are the facts? 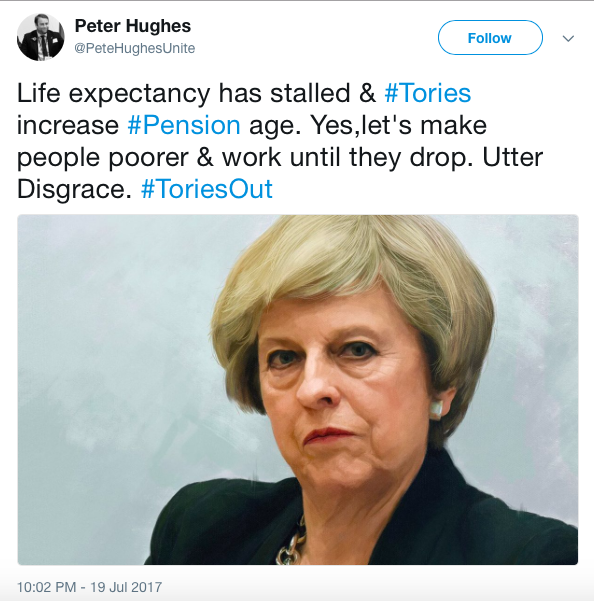 When the state pension was introduced the retirement age was set at life expectancy. Essentially back at the start of the last century you really did work until you dropped. Those who were lucky to life beyond 65 were ensured stat support for their final years with money paid in by themselves and by those who did not make it past 65. It was a self funding safety net.

But over the past 100 years life expectancy has increased dramatically, to 81, yet we have only nudged the retirement age up to 67. That leaves a massive black hole in the pension scheme. It is indeed a ponzi. My father's pension is paid for not only by his contributions but also by those of his children. If i make it past 67 - and years of selfless smoking and drinking make that very much an if - my pension will be paid for by the contributions of my kids and grandchildren, i.e by higher taxes or by a ballooning national debt which will be the burden of generations to come. This is not how the pension was designed to work.

Cowardly politicians have for decades dodged the issue. Aware that young folks either do not vote or believe in the money tree so do not realise how they are being stiffed but that older folks want more for free and do vote, no party has done what those who introduced a means tested pension kicking in at 70 in 1908 or even those who introduced a universal pension at 65 in 1946 would have done and upped retirement age.

Even today the cowardly Tories are not actually proposing to increase the retirement age from 67 to 68 at once but to do so in 2023 to come in effect many years later. This simply does not deal with the ponzi.

To add to the lies of the left there is a suggestion that life expectancy may be falling. There is no proof of this. We will not know for sure until the 2021 census, i.e before that decision is made in 2023. As it happens I suspect it is going to fall. Folks of my father's generation ( he turns 80 next year) grew up in a time when kids played sport at school in competitive games and on the streets without fear of paedophiles on every corner. They grew up in an era when family life did not centre on the goggle box and when far more of us ate fresh fruit ( once rationing ended) and vegetables.

The war and post war rationing ( real austerity) mean very few kids of that generation were fat. But from the 1960s onwards that all changed. Kids played less sport and watched more TV. We all drive everywhere rather than walking or cycling. And large swathes of the population, especially among the lower classes, existed on a dirt of junk food, rich in sugars and carbohydrates. We have become an obese and inactive nation and, however much cash we chuck at the NHS, that will inevitably see life expectancy reduced.

But it will not see it slashed to anywhere near 67 or 68. So the state pension will still be a ponzi. No politician will admit this. You will remember the howls about tampering with David Cameron's triple lock during the last election. that bribe to old voters only makes the ponzi grow bigger.

The honest approach is to recognise this and to gradually increase the retirement age not to 68 but to 78 and also to means test the pension. My father does not need the State pension as his University & private (Eton College) pension already puts him (just) into the higher rate tax band. Why on earth should he qualify for a State pension ( that safety net) on top when some old folks must exist on a pension which - as a sole source of income - is clearly insufficient?
The dishonesty of the left on this issue is matched by the cowardice of the right. The only consolation is that I may well not be around to see the whole mess of a ponzi collapse as, in the end, all such schemes always do.