Barcelona: the Cowardice, Double Standard and Virtue Signalling of the liberal elites

Back in 2004 there were horrible bombings in Madrid. The attackers at that point were Al Qaeda who stated that they were attacking Spain because it was involved in the war in Iraq. The Spanish surrendered. A new government pulled out of Iraq at once. Of course these days we give guns and money to Al Qaeda factions in Syria because we have a new enemy. As Orwell might have pout it: We are not at war with Al Qaeda. We were never at war with Al Qaeda, We have always been at war with ISIS. Anyhow the Spanish surrender has done it a fat lot of good as today ISIS has killed a stack of folks in Barcelona. The reaction of the world's leaders is to show cowardice, double standard but we are all to familiar with this are we not. First up was Donald Trump.

The Donald suggested from the outset that this was ISIS at work. The world's fake news liberal media went into attack mode because POTUS was jumping to conclusions, albeit ones that seemed fairly obvious to the rest of us. After 99% of attacks of this nature have been carried out by Islamofascists with just one or two right wing nutters also attacking and those chaps have been US based.  So it was a bit of a slam dunk cert that the Donald was right. Over on this side of the pond, the leader of the Welsh Nationalists, Plaid Cymru, a woman of little brain called Leanne Wood jumped to a different take on who was likely to be to blame.  Yup someone driving a car into a stack of European civilians who on earth could it be? Natch it is those right wingers again, get ready to blame Trump and Farage and to burn effigies of Katie Hopkins in the valleys.

is the tweet below an indication of a deranged mind set or just crass stupidity? The people of Wales might want to ask that question.  Natch, not one member of the liberal media was "outraged" at Leanne for jumping to conclusions or not waiting till more facts were known. The liberal media is only ever outraged by we conservatives. 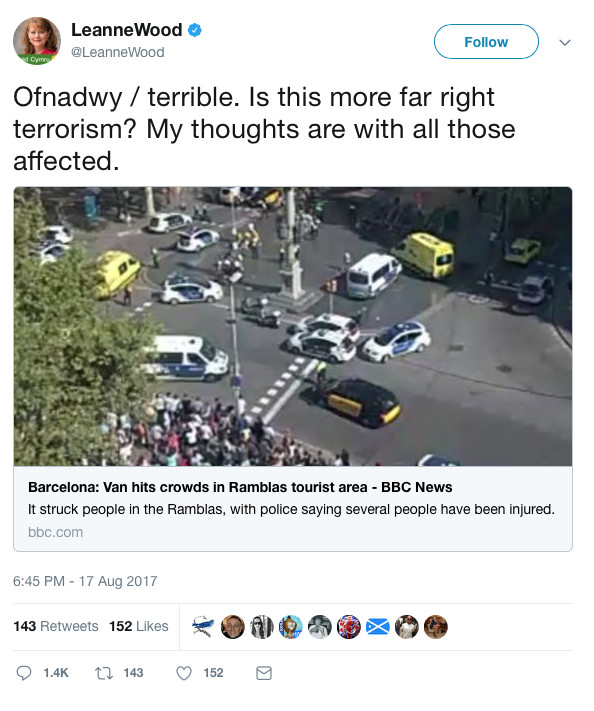 The rest of the political elite were not long in reacting as they took to twitter. #Barcelona. We stand in #solidarity. We will not change our Western way of life as that is what the terrorists want. We will defeat them by carrying on as normal. Yadda, yadda. Yadda.

Now where have we heard that before. Oh yes.  #Barcelona. We stand in #solidarity. We will not change our Western way of life as that is what the terrorists want. We will defeat them by carrying on as normal. Yadda, yadda. Yadda.  Or was that #Manchester or #Paris.  It is #wherever  innocent civilians get butchered by the Isalmofascists except when it is in Israel as the fucking Jews asked for it anyway. That is how the political elite, shielded by security barriers and men with guns, always react. And we carry on as normal waiting to see where women and kids will get butchered next.

Great, I can't think what is wrong with this policy other than it is a complete failure. I am just so tired of "defeating them by carrying on as normal and am prepared to risk defeat by doing things like rounding up all known ISIS supporters and sending them packing to Raqqa to let the Kurds, Syrians and Russians send them all packing to meet the 72 virgins.   But clearing our country of folks who might want to kill us would be to admit defeat so I guess that is unthinkable. A selection of tweets from the "great and the good" who are happy to risk your lives in order to carry on as normal is below.