My twitter feed is set to a New York location. In many ways it is where my heart is though my body is rarely there. And overnight #TrumpResign was trending. How pathetic it was. 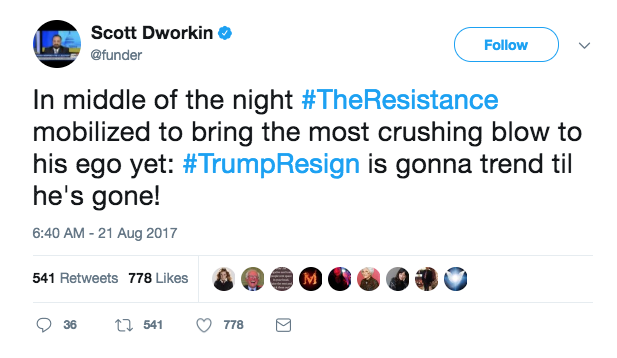 The millennials, the metropolitan elitists who'd rather eat their own toes than visit a flyover state, the Hollywood luvvies were all there. For once the actor who played Mr Sulu moved off his favourite topic "Do you know I'm gay" to his second fave Trump bashing. Why should POTUS resign: racism, Russian spies, nasty to LGBTQIABCDEFGs, all the usual reasons. All the folks who promised to emigrate to Canada if The Donald won last November, seem to have gone off the idea of moving to a socialist, soon to be, economic basket case and are tweeting to each other as #TheResistance.

Natch they disagree with Trump ( and 70% of Americans) and want to rip down all Confederate memorials to poor brave dead soldiers. Natch they - who would NEVER fight for their country - disagree with POTUS and most Americans and want Transgender folks on the front line. Natch they disagree with Trump about energy policy too. They hark back to the days when the White House handed out billions of dollars from the money tree to subsidise solar companies, not all of which were frauds and which created millionaires on Wall Street but sod all jobs. They look back with pride on how Obama's legislation helped to almost close down the US coial industry.

back in the real world we learned that since Trump became POTUS US coal exports have surged by 58% and jobs are being created in all those nasty flyover places that George Takei and his liberal elitists from the coastal states would really rather not visit. After all, the bastards in places like West Virginia and Ohio abandoned the Dems despite crooked Hillary's commitent to saving the polar bears and to LGBQTIMLNOPRST rights, just because they wanted a chance to work again in awful places like coal mines. The bastards voted for Trump - how goddamn selfish of them. And now trump is, at zero cost to the taxpayer but simply by rolling back daft laws,  creating jobs for them. But what do George and the millennials sipping a fair trade semi skimmed Colombian latte in a hipster joint in Brooklyn care about that? That is not a really important issue is it?