Photo Article: The Cheerleader fired for breaking her employment contract - oh it must be sexism

Great I get to run a photo of an NFL cheerleader and of the same bird wearing lingerie in an article and it is all because I am so supportive of the feminist cause. Sometimes I really like my job. Meet Bailey Davies formerly, for three years, a cheerleader with the NFL team the New Orleans Saints.

Bailey has been fired and her lawyer says it is down to sexism. So she is taking up the case, I kid you not, so that Bailey can help other women "break the glass ceiling." So what happened. The contract Bailey signed says that inter alia, cheerleaders must not pose in "nude, semi nude or lingerie shots." Bailey, as you can see below, posed in lingerie and then posted on instagram. And so having broken a well paying contract she had signed she was fired to be replaced by someone who was actually prepared to honour a contract that pays out loads of wonga.

Bailey thinks this is sexism. After all she is an athlete as are there the 25 stone hulks who play football for the saints and there is nothing in their contract to stop them posing nude, semi nude or in lingerie so this is discrimination against athletes who happen to be female.

Quite right darling. And have you noticed that the chaps on the field also get paid multiples of what you earn. Hell you are both "athletes" playing for the same team is this not sexual discrimination too. Go for it girl.. take them to the cleaners. 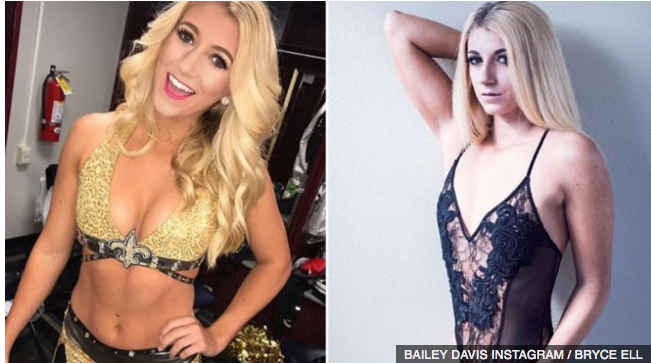