The Stupidity of Newcastle University Prof Alison Stenning on the Gender Pay Gap - are our kids really taught by folk so dumb?

Right now Professor Alison Stenning, a professor of Social & Economic Geography is considering her next strike action in support of maintain the ludicrously generous taxpayer funded pension scheme of which she is a member. She is also tweeting such absurd nonsense on the gender pay gap that I despair that our kids are paying £9,000 a year to be taught by folks this stupid.

Hell's teeth if you teach economic geography you should have some understanding of data? But the good Prof seriously reckons that the 19% gender pay gap at her University is meaningful data and allows her as a woman to claim that she is "working unpaid from 22 October." 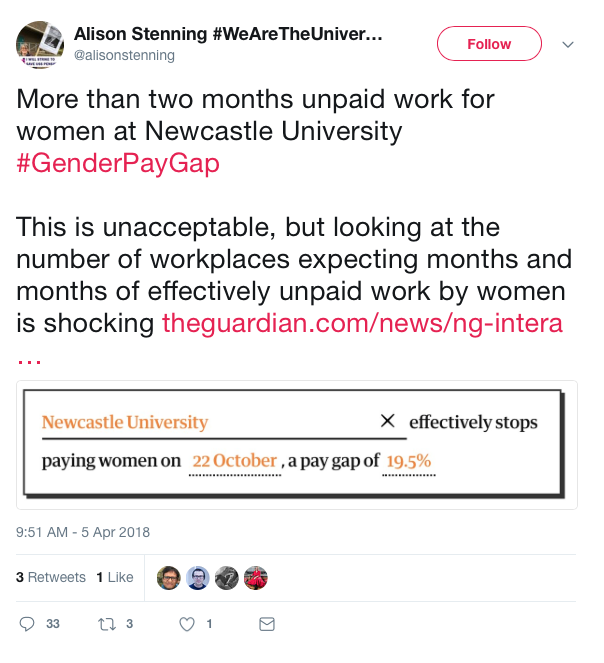 As I explained in this podcast referencing the two extreme cases of RyanAir ( a 72% pay gap in favour of men) and The Crown Estate (3.1% in favour of women) the headline data is utterly meaningless. It certainly does not mean that men and women with the same experience, doing the same hours and at the same grade at Newcastle University or anywhere else are not earning the same wage.

To give an example. Professor Alison Stenning says she is part time. So for a 0.5 post as a Prof she may earn £30,000 per annum (probably more). A man who is a full time Prof would earn £60,000 per annum. In the case of this pair there is a 50% gender pay gap and that is how it will show up in the overall Newcastle data the good Prof cites. But it is meaningless as in reality there is equal pay for equal work. The other reality is that there are just more part time female employees than men because although paternity rights now match maternity rights more women than men opt to go part time to look after kids.  As a part time worker with a wife who works full time, I am the only Dad when I go to play classes with my son, in a room of 30 adults, that is just the way society is.

Heck Newcastle may be a bastion of sexism. I don't know. But what anyone who crunches data with any academic rigour can see is that this Prof has arrived at a ludicrous conclusion based on data she really should know tells her nothing. And she is teaching this sort of way of thinking to our kids? Newcastle geography students should be asking for a refund.