Hamas, the rulers of Gaza whose leaders still openly talk of driving the evil Jews into the sea and who happily fly Nazi flags alongside their own as you can see below, continues to organise protests on the Israeli border. Thanks to the liberal media's hatred of Israel it has been a PR triumph. But the truth... 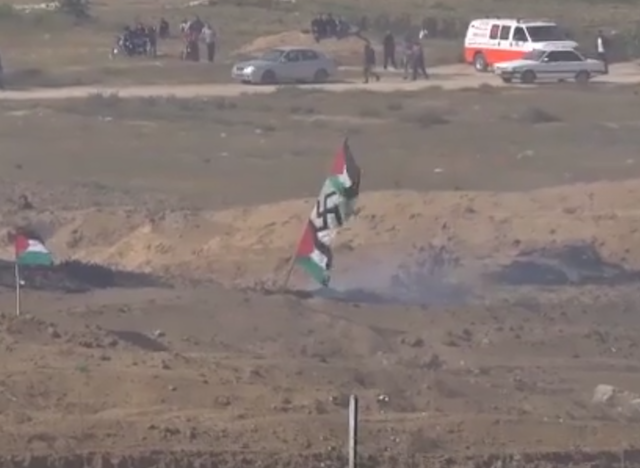 On day one of the protests, c30,000 Palestinians took part in demonstrations along the Gaza border, during which rioters threw rocks and firebombs at Israeli troops on the other side of the fence, burned tires and scrap wood, sought to breach and damage the security fence, and in one case opened fire at Israeli soldiers. So much for the "peaceful" demonstrators that the BBC and others reported on. But at least they were civilians right? Those nasty Israeli soldiers, the wicked Jews were firing at civilians. well er...no.

So far at least ten of the 15 killed have been identified by the Israeli Defence Forces as Hamas combatants as you can see below. The others are still being investigated. For rather than fire indiscriminantly on civilians as the Western media states time and time again, the IDF was targeting combatants. Hell's teeth even Hamas has fessed up that five of those killed were its own guys. Has the BBC, CNN or The Guardian reported on that? Of course they have not. 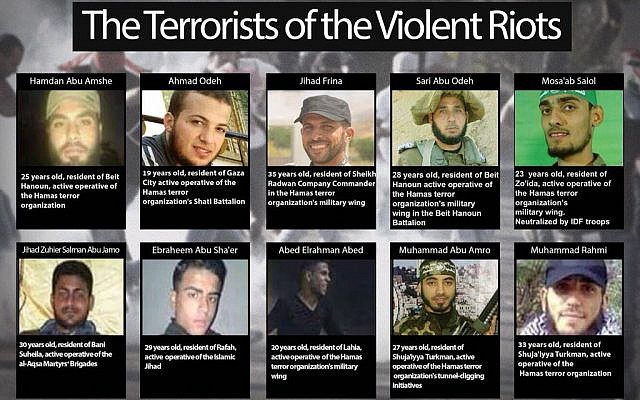 These are the facts but the Western liberal elites don't care about facts. The narrative is of peaceful civilians being indiscriminantly fired on by the wicked Jews again. The truth is that the mob was a mixture of Hamas soldiers and civilians whipped up to act as a human shield for combatants. In the same way, Hamas launches its rockets targeting Israeli civilians from inside schools and hospitals knowing that any attempt by Israel to take out its weapons will result in civilian deaths and another PR triumph. That is thanks to a complicit Western press.

The facts never change, the human shields and PR triumphs of Hamas never change. When they know that the BBC and others will lap it up why change tactics? If the Western press was to report what is really going on then Hamas might stop using its own civilians as human shields and that would not be a bad thing would it? But such is the loathing that the liberal media elites feels for Israel, the facts will never be reported when they conflict with the narrative of victims in Gaza good - everyone there is a victim even if they are firing rockets on an Israeli primary school at the time - and  Israelis bad.