As we know big Corporations love the EU. Goldman Sachs led the cheerleaders for Project Fear and the ball breakingly liberal virtue signalling elitists at LinkedIn have jumped in on the act with some selective use of their own data.

Joshua Graff the UK Country Manager & VP EMEA at LinkedIn has penned the article below which states boldly at the top:

Our latest Workforce Report reveals that since the Brexit referendum the flow of talent has reversed, the UK is losing talent to the EU, and other potential sources of skills are not filling the gap.

The headline on the LinkedIn alert was even more scary " The UK is losing talent to the EU". Well er no Joshua old fruit, your own survey which is by definition selective as not everyone uses LinkedIn to hire, cannot substantiate the claim that this is because of Brexit

As we all know, for many years bright young things from the economic zombie that is the EuroZone have moved in large numbers to the UK, notably to London. For the same reasons that there are few economic migrants heading across the Med seeking a better life in Chad or Upper Volta, far fewer Brits seek work in the EZ.

So has this flow of talent been "reversed" as LinkedIn's Graff claims with more Brits heading to the EZ than Europeans heading to the UK? Yes it has. There are now marginally more folks leaving the UK for the zombie zone than vice versa.

There has, it seems been a 26% fall in EU folks coming to the UK. But there has also been a 20% fall in folks from outside the EU coming to the UK. So perhaps it is not just Brexit? Maybe it is the sky high costs of living in London of affording a roof over your head? Who knows? Or maybe if Josh read his own data...

There is a killer admission buried at the bottom:

The UK remains a net importer of talent from non-EU countries, because the number of professionals leaving for these countries is still lower than the number arriving from them.

There is a more important point which might explain why EU nationals are coming to Britain in fewer numbers: there is less demand for them. The LinkedIn survey states:

Hiring nationally is down across the UK. The seasonally adjusted (S.A.) Hiring Rate across the UK was down Month on Month (MoM) in March, falling 1.2% since February and maintaining a downward trend since January. Year on Year (YoY), the hiring rate was 6% higher in March 2018 versus March last year.

Apparently the only sector that is hiring much more is, quelle surprise, the public sector. More sociology lecturers and consultants on transgender awareness for the NHS, that is what we need.

The LinkedIn data is based on "relevant insights from a survey of more than 600 recruiters and HR professionals in order to understand the experiences of talent professionals working in this changing environment". So these folks are hiring fewer folks so perhaps that explains the trends. But it does not mean that Brexit is to blame. Events can be conjoined but not connected, as the philosopher Hume explianed so clearly.

UK employment is now- despite Brexit - at its highest ever level and unemployment is at a 42 year low. Yet somehow arch remoaners manage to conclude that Brexit is causing untold damage to our economy. Whatever....the planes leaving Heathrow are packed with Brits fleeing Brexit says LinkedIn. 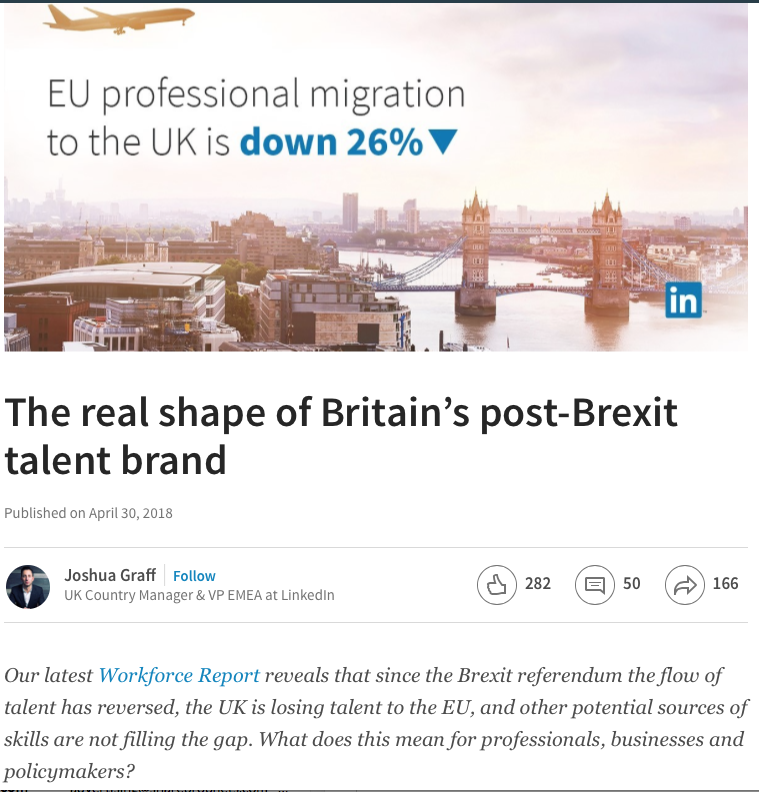