My father, a closet reactionary, actually rather despises Guardian readers although, to appease my public sector working and rather bossy sisters, he still has a Guardian delivered every day and reads it dutifully before calling me to say how angry he is about whatever piffle has been published in that edition.

He is also fully aware that while capitalism has been lifting hundreds of milions out of poverty, his cash which is not wasted on a bloated bureaucracy in Blighty is usually stolen out in the field, wasted or used to employ the legions of child molesters who work for the NGOs.

As such he does not mind when I make it clear that if Tom Winnifrith is ever called again by this charity he will cancel his direct debit altogether. If there is any objection I start to ask questions about how many paedophile scandals they have covered up this week and they soon piss off.

With this in mind I see that Oxfam now has a lottery. Whereas foreign aid should be defined as "a transfer of wealth from poor people in rich countries to rich people in poor countries", lotteries are a simply "a tax on the stupid." Does Oxfam really think that my Dad is enticed by the thought that by handing over more of his cash he "can win prizes every week." Does it think its donors are that stupid?

Then to say that the cash which is not used for prizes will "beat poverty." when we know that 11 Oxfam staffers earned more than £100,000 last year with the then CEO picking up pay and expenses of c£140,000, is just a lie. Part of the cash that Oxfam lottery players - very few of whom earn telephone number salaries - hand over will be to support a stack of grossly overpaid staff at headquarters. They are not suffering poverty.  But not all of the cash Oxfam extracts is used on overpaid staffers at HQ or on "campaigning" against capitalism. There will be some left over to help pay the wages of peadophiles "hard at it", in the field. 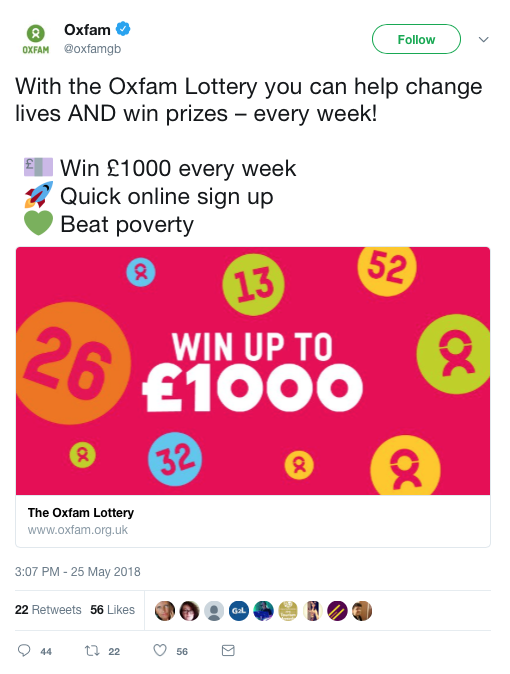