On the left wing madrassas that are the Universities of the West and in other epicentres of liberal and progressive thought support for Palestine and opposition to Israel, ranging for demands to boycott it, the drumming out of Israeli lecturers and calls for a Palestinian state “from sea to sea”, i.e the destruction of Israel are mainstream. Anyone opposing this virtue signalling will soon discover, as did uber-liberal US chat show host Bill Maher last week, that they are soon lumped in with the wicked Jews amid calls for their career destruction.

If you really want to virtue signal not only must you be pro Palestine and anti Israel but also be a victimised minority member yourself, hence the rise of the grouping pictured below “Queers for Palestine. But the reverse is, of course, not true. In Gaza, though not the West Bank, homosexuality is still illegal and punishable by death although Lesbians do not break any laws merely facing becoming social pariahs. And this week in the West Bank the authorities banned the LGBQT group Al Qaws from holding a meeting in Nablus amid a total crackdown on any of its activities.

Luckily for oppressed gay folk in the West Bank or Gaza there is one, just one country, in the region to which they can flee and then love who they want, marry who they want, go on Pride Marches or to gay bars and live with the full rights the LGBQT community in the West take for granted. That country is, of course, Israel, a transgender accepting country the founders some of the BDS movement want to be swept from the map.

The left does not do irony and thus queers in the West are still for Palestine and anti Israel while queers out East thank their lucky stars that the petulant demands of their Western liberal “supporters” as they match on Pride with their banners in hand, are not met. 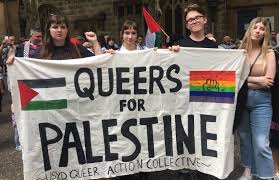 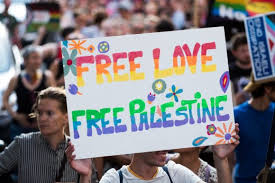 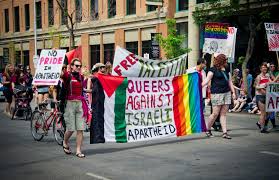