BBC cannot bring itself to headline the big story on terror threat, those darn jihadists

Another day, another reason to wonder why on earth I have to pay a license fee to fund the BBC. This time the subject is the terror threat. Read the headline below “fastest-growing UK terror threat is from far right” and you would think that the streets are crawling with Nazis wanting to blow us up. Well er…not exactly, as the text of the article makes clear.

In 2017 6% of the Police’s anti terror caseload concerned far right extremists. Now it is 10% according to Neil Basu, the head of UK counter-terrorism, and a man who jas claimed that the mainstream press help radicalise those on the far right. Whatever.  Basu fails to say what the total caseload was in 2017 or 2019 so we cannot quantify the actual increase or decrease making the headline statistic rather meaningless. He states of the far right terrorists “It’s small but it’s my fastest-growing problem.” The BBC natch latches onto the latter part of that for its headline.

Perhaps what most folks are concerned about are the other 90% of terror threats. I guess a few of those may be whatever the New IRA calls itself today but nearly all of the rest will be jihadists.  That is the biggest terror threat to Britain, but for some reason the BBC seems reluctant to focus in on that.  I cannot think why.

Of course, my household is mixed race so I dont trivialise a right wing terror threat but the FACT is that this family is almost nine times as likely to be attacked by a jihadist as by a Nazi. So that is what concerns me most. But I guess those grossly overpaid BBC hacks writing this article were so infused with white guilt they could not see that. 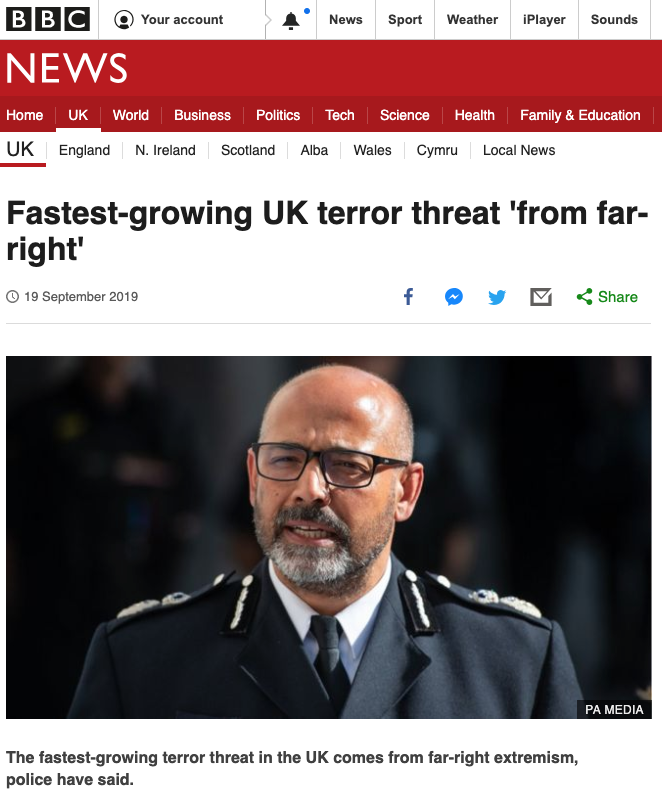