Photo article: Day 6 of the 2019 Greek Hovel Olive Harvest, that is me Thomas - Monday

Day 6, of the harvest was to be our last day as a full team, volunteer T1 was heading off at midday Tuesday. So we tried to make the most of it, finishing off the trees on the top plateau and starting to head back along the terraces on the side of the hovel facing the Mountains rather than the abandoned convent.

We worked well as a team with heroic K taking the lead but all chipping in thrashing branches K had cut, moving mats, filling bags from those mats, seiving out the leaves and by the end of the day we had taking the total number of bags from 13.5 to almost 18 – the previous year’s total but that harvest involved Albanians.

In the evening we drove into Kambos allowing the team to see the bags Nicho the Communist had dropped off at the press the previous evening, as you can see below.

As it was T1’s last night I drove down the narrow mountain road down to Kitries, offering my guests a seafood meal. In the summer this drive is done in the light and the only cars coming the other way tend to be small hire cars one can easily pass on narrow bends. At this time of year it is pitch black and what you meet coming the other way are 4 by 4’s laden with bags of olives which are rather harder to pass. So it was a long and less than relaxing drive.

And both restaurants in Kitries were closed as I sort of suspected they might have been since there were no tourists to serve and all the staff would have been picking olives all day. And so it was back to Miranda’s for that last supper of the band of four. Much more red wine and tsipero’s for my comrades and Metaxa for me. Two days to go… 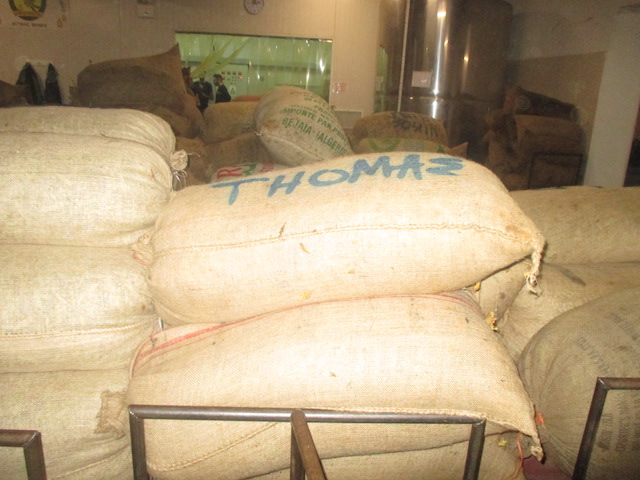