Priti Patel tells a desperate lie, a sign of a Government in crisis over Covid-19

I have always been a big fan of Priti Patel largely because she has an unrivalled ability to infuriate the liberal metropolitan chattering classes. The Mrs says that if we had another child she wants it to have an Indian name. I have hitherto said a daughter should be called Priti in honour of the true heir to Thatcher. The Mrs was opposed to that and I have now changed my mind after the tweet below from the Home Secretary. It is a brazen lie but it is symptomatic of a Govenment whose Covid policy is now all about coverng up its own blunders rather than doing the right thing. And, as such, we are now being fed lie after lie which the MSM, having bought into the mad GroupThink without question, is only starting to dare to call out.

Yesterday around 300 souls gathered in Hyde Park to protest against the Government’s increasingly bonkers lockdown policy. A heavy handed plod arrested nineteen of them and threatened many others includng my pal James Delingpole, who was ordered to leave even though he was there as a journalist and was able to produce a press card to prove it. He was “let off with a warning” These are the actions of a Police State and the minister responsible is Patel who tweeted: 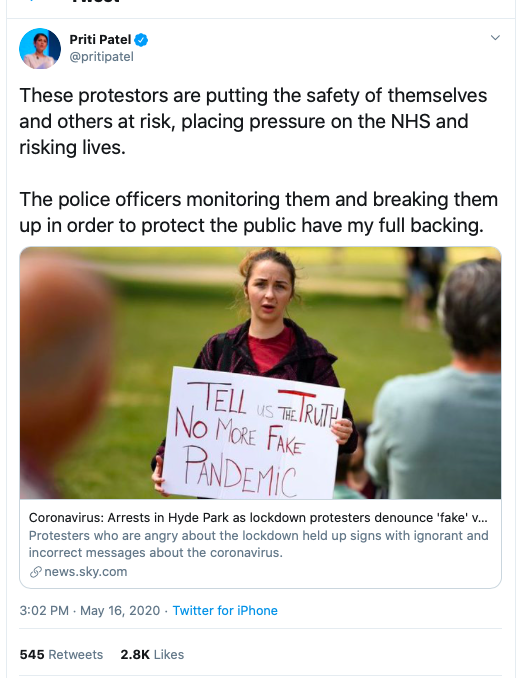 But this is a very obvious lie. How do the 300 place pressure on the NHS. Lord Sumption, writing in The Sunday Times today offers up the data.

The critical care capacity of the NHS has nearly doubled since January, even without the 4,000 or more additional beds in seven temporary Nightingale hospitals. Around the top of the spike in infections, on April 10, 41% of NHS general acute beds were empty. Only 51% of acute beds were occupied by a Covid-19 patient. The current figure is 20%. The Nightingale hospitals stand empty. These are government figures.

Even were all of the the 300 to have caught the virus from a super spreader in their midst it would not put undue pressure on the NHS at all. It is patent nonsense from the woman who also allowed the Cheltenham Festival (attendance 60,000 a day) to go ahead.

Patel is talking a mixture of patent nonsense and outright lies. But so are the rest of the members of this Government, Boris included. A policy based on a joke model produced by Professor Pantsdown has wrecked the economy, will bring forward tens of thousands of deaths from undetected or untreated cancers and other ailments and from depression and, as Sweden has shown, was simply not needed.

Across Europe kids are already back in schools. In Sweden they never left schools, a policy decision which resulted in almost zero under 19 fatalaties, the same as in the UK where all schools were shut.  Maybe because Tory MPs usually send their brats to fee paying schools offering good online services, they have not noticed how most normal kids are suffering. I have seen first hand just how poor the offering for state school pupils has been and as the Government justifies its past actions by pretending there is still a threat to the health of our kids, it makes them suffer at home with patently inadequate tuition. The opportunity gap between stated educated kids and the posh kids is widening as never before.

In thrall to bedwetting teachers who have already let the kids down so badly with a shoddy service, the Government refuses to re-open all schools at once. For that would be an admission that it erred in following the Prof Pantsdown model in the first place.

We will look back on this episode  in our history at the actions of our Government and the mainstream media and we will be appalled. I sense that, slowly, more and more folks are realising the scale of this blunder and its calamitous results and, however many lies, Priti and her colleagues tell, the anger among we dirty plebs will only grow.