When you thought MPs could not get any more stupid...meet Zarah Sultana

University (liberal arts degree at a 3rd rate institution natch), brief stint working for a charity then full time Labour Party worker. Real life experience SFA, Inate intelligence ditto. Perfect. Find a safe inner city seat and become an MP: you will fit in well. Welcome to the world of Zarah Sultana, MP for one of the more ghastly parts of the dump that is Coventry. It ia hard to know where to start with her latest tweet  which is below. 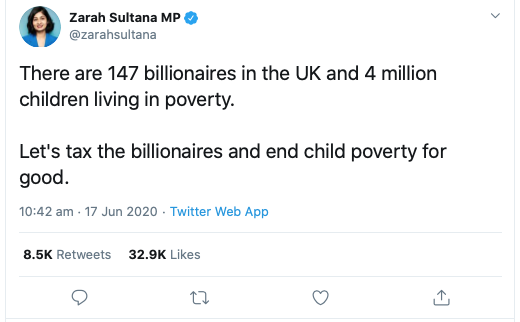 Well let’s start at the top. Billionaires may have no income what Zarah resents is their wealth. She does not distinguish between those who inherit, those who earn, those who risk capital so creating jobs etc and do well she just lumps all with wealth together. And Zarah thinks that the State has the right to seize wealth. I suspect that most of us think that our private possessions, our homes, our bank accounts, our books belong to us and that the state should not simply announce that it is stealing some of our possessions if we have assets above a certain value. But Zarah thinks that is okay.

I will ignore the moral objection to what she proposes. The practical one is that once the state starts stealing wealth in this way folks who may not be the initial targets see that the writing is on the wall and move their welath and their income where the state cannot get to it. Indeed if Zarah sits on the brink of power any time soon, the 147 folks in her initial list will nearly all take pre-emptive steps to safeguard their savings. I imagine the Queen might not but the other 146 will. It is really not hard to do this if you have a bit of cash in the first place. And so you kill lots of geese that lay golden eggs and, as happened in the 1970s, you end up with lower income for the Government.

If Zarah read a bit of history she might know this.

Then there is the issue of the 4 million kids in poverty. Of course there are not. What Zarah refers to is relative poverty so these kids are those who live in households where income is less than 2/3 of median household income. In absolute terms these kids are far better off than the poorest 4 million kids 10 years ago or 50 years ago but Zarah cares not a jot about absolute poverty which is falling. She is rich enough only to care about relative poverty.

Her proposal would actually reduce the number of kids in relative poverty. As the billionaires and millionaires and those of us who aspire to be, at least, the latter flee Zarah’s UK the median household income would fall. Thus there would be fewer folks living in poverty though, in absolute terms, the poor would be no richer.  However, there would also be less Government cash for schools, roads, hospitals, welfare, etc, etc and the country might eventually end up going to the IMF with a begging bowl as happened in 1976. But as long as there are fewer kids in (relative) poverty I assume that Zarah would be a happy bunny?