Before anyone kicks off because they may not like my conclusion, let us be clear, Black Lives Matter as a slogan is fine.  However, White Lives Matter really is, at best, meaningless gibberish. You need to put this into context.

Black Lives Matter is an appropriate slogan because disproportionate numbers of black folks are shot by American cops. The numbers do not indicate genocide as too many protestors insist. Last year, just nine unarmed blacks were killed by US cops, a couple more than the number of black folks killed by lightning. But that number of 9 is still proportionately way higher than for whites (19). In saying BlackLivesMatter you are making the very valid point that there appears to be a systemic issue, suggesting that some folks with power think otherwise. That blacks are poorer than whites and also far more likely to be victims of crime than whites only adds to this very legitimate point.

Having lived in the US and visited it often, I’ve seen first-hand how the Police there have become far more multi-racial. And going back to before I was born, the make-up and the attitudes of a then, almost entirely white, Police forces are from another planet. So things have got better and until Covid, under that wicked Trump fellow (although not under his predecessor the Saintly Obama), the income gap was also closing. But there is still an issue.

Those who say WhiteLivesMatter thus miss the point. We whites are less likely to be shot by a cop in America and we are likely to be richer and less affected by crime than black folks. We are less likely to see our kids caught up in crime and going to jail. So, the State appears to already recognise that white lives matter. As such, anyone shouting this slogan is either too thick to understand what BLM means or is deliberately ignoring it because of their own innate prejudices.

Moving on to the statement “White Lives don’t matter…as white lives.” That is simply a more provocative way of saying Black Lives Matter. Some will find it offensive, as they are too dim to understand the original provenance of Black Lives Matter, but offending should not be a crime. Except, that with the UK’s daft hate crime laws where an offence is deemed to be an offence if the “victim” feels a grievance, it might arguably be so.

So far, I dwell in the hypothetical but there are three real cases here and this is where our double standards come into play.  Mr Jake Hepple is a white, working-class, Burnley supporting football oaf who towed a banner behind a plane saying “White Lives Matter” as his team got thrashed by Man City. His girlfriend, Ms Megan Rambadt, may have been involved in the stunt but was not on the plane.  Ms Priyamvada Gopal is a Cambridge academic who tweeted the comment about white lives not mattering.

The Police have investigated only one of the three. Guess who? Yes, you got it in one. It was Mr Hepple and Plod found that no crime was committed. But his employer, Paradigm Precision, fired him anyway. Mr Hepple seems like a bit of a yob and appears to have some rather unpleasant views but he was fired solely for the aeroplane stunt. Ms Rambadt was said to have brought her employer into disrepute and so Solace Foot Health insisted that she go on a course of “racial sensitivity training.” Having committed no crime she refused and was sacked. I suspect that both of these individuals would have a very good case for unfair dismissal.

Ms Gopal received some utterly barbaric abuse on social media which would not have been out of place in 1950s Mississippi had the KKK had twitter back then. It really was loathsome. But her employer, Cambridge University, stood by her and indeed gave her a promotion.

At this point, I make my position clear: none of the three have committed a crime. I sense that Ms Gopal’s motive was to be controversial but that is within her rights and the intent of her statement is wholly a legitimate one. I’m not so sure about Mr Hepple – was his banner driven by prejudice or by a failure to understand why the statement BlackLivesmatter, if not necessarily some aspects of the movement, is one we can all stand behind, or should stand behind. If his defence is that he is not very bright and so did not understand the nuances of BLM, from what I have seen of him, that would appear very plausible.

But he should not have been fired and the treatment of his girlfriend seems utterly rotten. I suspect, no I know, that I’d be far more likely to enjoy the company of Ms Gopal than of Mr Hepple and his other half. Maybe that is because I am an intellectual snob but that should not prevent me from saying that all three characters here have a right to be heard and not to suffer financial penalties for having an opinion.

We appear to see different rules of free speech in action and that is not something that is likely to make our country any happier or united. It is a double standard.

The second double standard here comes from the sad, Guardian reading, centre-left poltroons who run Britain’s second-best University.  The tweet below makes the position clear – it supports academic free speech.  Except that it does not.  Jordan Peterson was set to spend a term in the Fens but a social media mob was whipped up and the offer to the right-wing scholar, again a man who has committed no crimes with his words or writings other than being right-wing and challenging woke theology, was withdrawn. And Peterson is not an isolated case of Cambridge turfing out right-wing Dons.

If you are woke, Cambridge will back you to the hilt but, if you are not, then the Cambridge double standard kicks in and it does not support academic free speech. Sadly, Cambridge is not alone. On campuses across the UK, free speech is more and more under threat.

For Ms Gopal, I offer a word of caution from the sort of history not fashionable to be taught in school these days. Does she remember a gentleman by the name of Robespierre?

You, Ms Gopal, are now the revolutionary. But you won’t always be. The revolution will move on and one day you may find that the mob does not like you. Just ask folks like the great Peter Tatchell or Germaine Greer, brave and heroic pioneering campaigners for minority rights in the past but now no-platformed by today’s revolutionaries. The mob moves on and unless we fight now, not just for Ms Gopal but also for yobs like Mr Hepple and thus for free speech for all, the mob will one day turn and may devour even Ms Gopal. 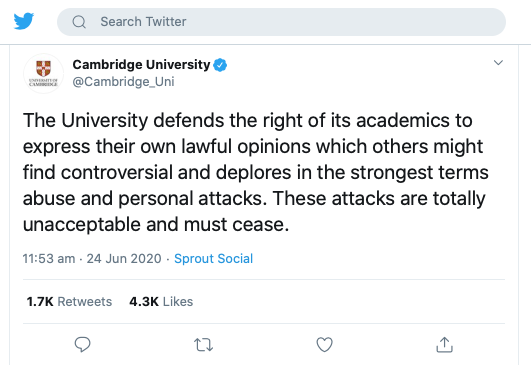