Just five minutes ago, I explained at great length why everyone should support the idea behind BlackLivesMatter and why it is not the same as the statement WhiteLivesMatter. However, it becomes harder to support BlackLivesMatter – the organisation – as its protestors attack the Police and say that they wish to defund the Old Bill, or when its organisers say they wish to end capitalism. As each statue of great men such as Grant, Lincoln or Guy topples, some who may sympathise edge away. And now comes the ant-semitism. If the tweet below was sent by an ordinary citizen there would be calls for Police involvement.

BlackLivesMatter UK again, like Rebecca Long Bailey – to whom the BLM tweet refers - seems to think that not being allowed to push a blood libel against the Jewish state is a restriction of one’s ability to criticise Israeli foreign policy. It is not and most of us know that.

We live in dark times and anti-semitism is a major issue. BLM should know all about oppressed minorities and so surely should have some sympathy with Britain’s beleaguered Jews. A survey out today shows 19% of Britons think the evil Jews had something to do with the spread of Coronavirus. Now BLM think it’s okay to try linking the death of a black guy in America to the Jews as well? 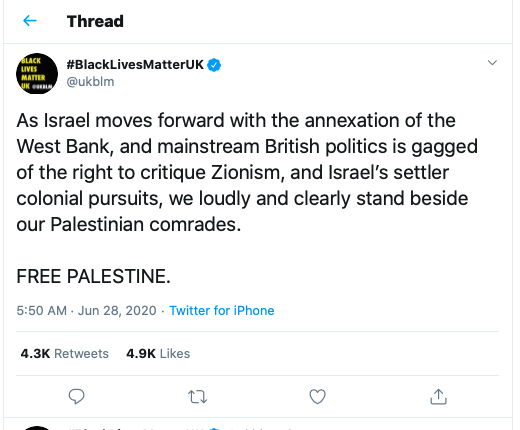