As I warned Cambridge don, Dr Gopal, one day you will cease to be seen as a revolutionary and new revolutionaries will come along and devour you like a dinosaur.  Comrade Sadiq Khan, Mayor of Stab City, rather proves my point today as he tweets about the 51st anniversary of the Stonewall Riots in New York. Of course, Mayor Khan is already active in erasing old history, pushing to pull down statues and rename streets. If you can do that, it will be even simpler for this simple man to make up a new history.

These days, Christopher Street in Manhattan is rather plush and smart. I had a meal there a couple of years ago at the sort of uber expensive restaurant you’d find in Islington. All organic, very woke and terribly expensive. But back in 1969, it was grimy, dirty, homeless folks slept on the sidewalk and it was an all-round bad area. So it was an ideal place for, then illegal, gay bars to operate. One such bar was the Stonewall Inn. Normally the owners, the Mafia, paid off corrupt cops to leave it alone or at least to tip them off if a raid was planned. But 51 years ago today, the system broke down, the cops raided and a riot broke out. There was another riot the next night and, in many ways, that was the birth of the Gay Rights movement.

But gay men and lesbians are a bit passé in the victimhood hierarchy these days.  These days, the new battleground is Trans, and Sadiq Khan celebrated that point with the tweet below which sounds great but is, of course, utter fiction. 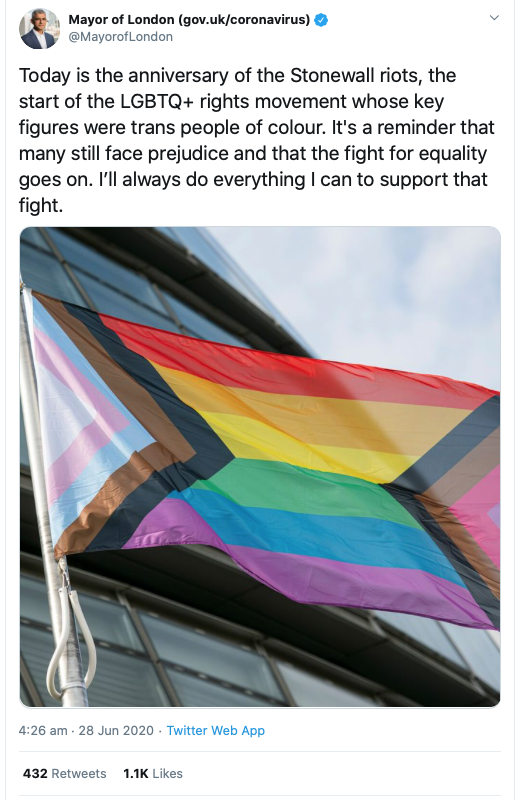 The word transgender was first used in 1965 but did not enter normal discourse, even among the gay community, until the 1970s. There were no “leading figures” at Stonewall.  It was just a crowd acting spontaneously to clear wrong. The first punch was, apparently, thrown by a black lesbian and on the second night, a black transvestite attracted attention climbing a lamp pole and smashing a car windscreen. But he was a transvestite, a self-identifying gay man who liked to dress in women’s clothes – not someone who identified as a woman. He was not transgender and is unlikely that anyone there was. There were homeless folks in the riot, largely white.  But the vast majority of folks there were just common or garden gay, usually white, men and some lesbians.

That, Mayor Khan, are the facts and we should all celebrate their heroism as my hero Peter Tatchell did by marching through London yesterday as he has done every year for 49 years on this day. Instead, Khan seeks to erase the gay men and lesbians like poor General Grant and rewrite history to create new heroes. That is quite simply wrong.