The Orwellian vision for Universities of the Guardian's Sonia Sodha

The peak years for state school entry to my old University, Oxford, were in the 1960s. Then, successive Governments and Education ministers including, in a rare error of judgement, the blessed Lady Thatcher, started to scrap grammar schools. The ladder which gave bright working-class children educational and social mobility was whipped away as they went along to comprehensives. Comprehensive schooling has, almost entirely, failed both the bright poor and not so bright poor who, on most measures, fall as dismally in later life as they did in the “bad old days”. But one institution has a solution… an establishment where most of the senior staff went to public schools and Oxbridge. Yes, you guessed it…

It is that, increasingly, little-read publication founded on profits from slaves. That is to say the BBC’s sister publication, The Guardian.  Its star columnist, Sonia Sodha (coy about her schooling, but graced Oxford with her presence), believes we should stop obsessing about A level grades. In her Orwellian world, kids with the best A level grades shouldn’t have the opportunity to study the toughest courses at the top universities.

Sonia knows this is tosh. On the course that she and I both studied (PPE), we had to write two essays a week except in terms when it was three. At my wife’s old place of work – the Marxist Madrassa at Bath Spa – it is only one per term. I suggest that had Sonia and I both attended Bath Spa, we might have got a little bored of the lack of stimulation.  One good mind (hers) and my own, on which I pass no judgement, would have been wasted. Were Bath Spa students admitted to Oxford, even for an “easy” course such as PPE, they simply wouldn’t be able to cope. “Three essays a week! And I have to read original material, in books! It’s a breach of my human rights.”

Exams are about grading levels of success and also noting failure. That is, at least in part, determined by innate ability and how much work one does. Not all kids make the cut after GCSE and go on to do A-Levels, and not all A level students get good enough grades to go to University.  That there are too few state school kids at Oxbridge is, I agree with Sonia, a bad thing. But if you want to fix that you do not dumb down the better universities, but instead fix the broken state school system, and that should start by scrapping comprehensives. 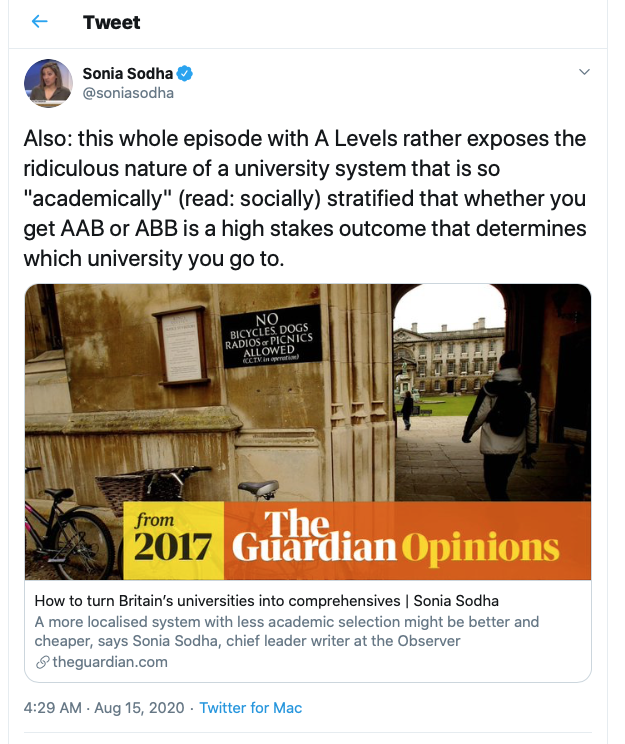