Cat Lewis is the producer of the BBC’s Songs of Praise and has leapt into the debate on Rule Britannia in spectacular style. If the state broadcaster had any sense, it would fire her at once for stupidity, ignorance and for insulting 99% of those whose taxes pay her bloated salary.

I demonstrated earlier that Rule Britannia is a song about the freedom we Britons enjoy in a beautiful and prosperous land compared to those poor souls labouring under tyrants in mainland Europe. Had Cat read the words carefully and sought to understand the historic context, she might have realised that. Celebrating freedom, prosperity and the beauty of our nation is surely exactly what should unite us.

But Cat is either too lazy to study or so woke that she always jumps on a bandwagon of race-baiting ignorance. That should be enough to disqualify her from enjoying her BBC pay. But it gets worse… 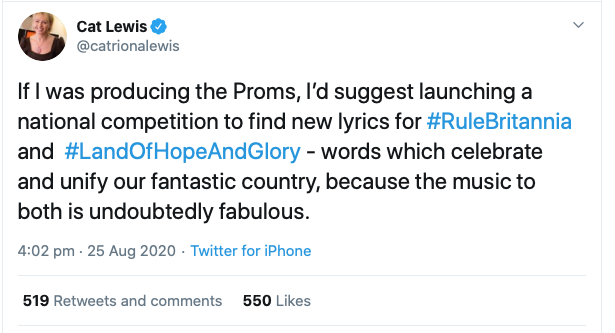 Do those Brits who believe it’s ok to sing an 18th Century song about never being enslaved, written when the UK was enslaving and killing millions of innocents, also believe it’s appropriate for neo-Nazis to shout, “We will never be forced into a gas chamber.” #RuleBritannia

Of course if she’d checked the context, this disgraceful human being would have realised that Rule Britannia is not about being made a slave, as in cotton picking. Indeed its references are all to another continent (Europe). To thus compare supporters of a legitimate song to Nazis is just a tiny bit offensive is it not?

Moreover, Cat might note that almost everyone in Britain, including the leaders of both main parties and the vast bulk of the population, seem to support the singing of Rule Britannia. So she insults almost the entire nation when comparing us to Nazis.

A properly run BBC would be sacking Cat on the spot. That it will not even discipline her for her ignorance and offensive comments shows that it is as out of touch and happy to wallow in ignorance as she is and is another reason why more and more of us conclude that we should #DefundtheBBC.