It is now more than thirty years since Michael Heseltine and a group of other traitors stabbed our greatest ever leader, Margaret Thatcher, in the back. I was on an underground train when the news came through. As it was heading out East to the great county of Essex, I kid you not that there were folks crying.

The reward of Heseltine and the other worms is to have been invited more than any others by the BBC to appear on TV and Radio to speak as “a senior Tory”. Even when he was voting for another party in an election, the BBC could trust Judas to speak out as a Tory slating the Tories.

Folks forget that when Maggie came to power, the UK had only three years beforehand been bailed out by the IMF. A strike-ridden country was the sick man of Europe. The Winter of Discontent was just behind us. By 1990, that had all changed and for that we must thank Maggie.

But it seems that today’s ills are, in the minds of the demented left, all still the fault of the woman they term Thatcher, with an exclamation mark.  One such commenter on Twitter, a Mr Mark D’Arcy, perhaps not his real name, has to great acclaim blamed the greed and obsession with self we see today on Thatch. Yes, even after 30 years, it is all her fault. He does so by utilising a misquote.

I think greed is good. It is what oils the wheels of capitalism. It is capitalism which came up with tests for Covid, with vaccines and which will come up with a cure. Not communism and not the state. It is the private sector that will ensure shelves in the stores are stocked this Christmas and which ensured during lockdown that folks got home deliveries. Not the state. If you want to see Christmas shelves when what determines what is on them is not the invisible hand ( i.e. greed) but the state, look at footage from behind the Iron curtain in December 1982.

What is interesting about Mr Darcy’s quote “there is no such thing as society” is that it is not exactly what Maggie actually said. If you take those words in isolation, you might think it means that we are all individuals and need to shit on each other to advance ourselves.  But that is not what Maggie actually said or meant. The full quote from 1987 is:

“They are casting their problems at society. And, you know, there’s no such thing as society. There are individual men and women and there are families. And no government can do anything except through people, and people must look after themselves first. It is our duty to look after ourselves and then, also, to look after our neighbours.”

Her point is that the State cannot make life better for us all. It is individuals who can do that. And just as passengers on a plane are told to get their air mask if the plane is crashing and then attend to others, that is Maggie’s message. She clearly commends us to look after our neighbours. As a devout Christian, Maggie really did believe that one should “love they neighbour”.  She believed wholeheartedly not in a selfish world of individual homesteaders isolated and hostile to each other but in a community – a community where we all strived to make the world a better place as only capitalism can do but to ensure that we look after others as part of that process.  That is a realistic but loving message rooted in the Christian faith.

And for what it is worth, there is a lot of evidence that she viewed the “Loadsmoney” type characters of the 80s with some distaste. Most were not entrepreneurs but rather crass crony capitalists. They may have loved her but her admiration was not for folks like them.

But the left, as is its wont, has rewritten history by repeating just six words from a much longer quote to cast Maggie as a villain. Kids at school and the Marxist Madrassas of our University System are taught that Tories don’t believe in society or indeed compassion and those six words are used as evidence of this. George Orwell would have been proud of comrades such as Mark D’Arcy for making a new history for Airstrip One in the tradition of those lefties from the 1940s who tried to stop the publication of Animal Farm.

Incidentally, D’Arcy’s tweet was retweeted as you can see below by Felicity #BlackLivesMatter Baumflaugh who describes herself as a Passionate Europhile, Methodist Local Preacher, LGBTQ ally and gives her preferred gender. I have read her other tweets and conclude that Felicity is probably not a genuine person from the barking mad lefty part of the spectrum. She is probably a parody account. It is hard to tell these days. 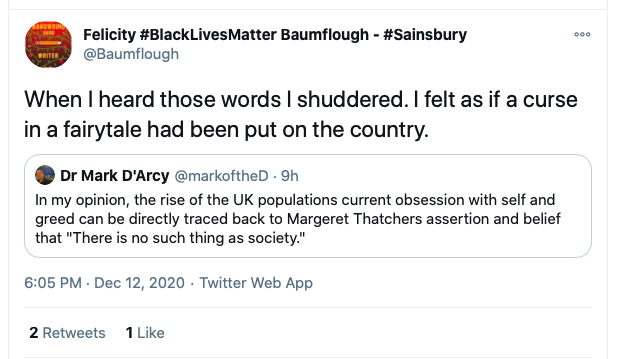 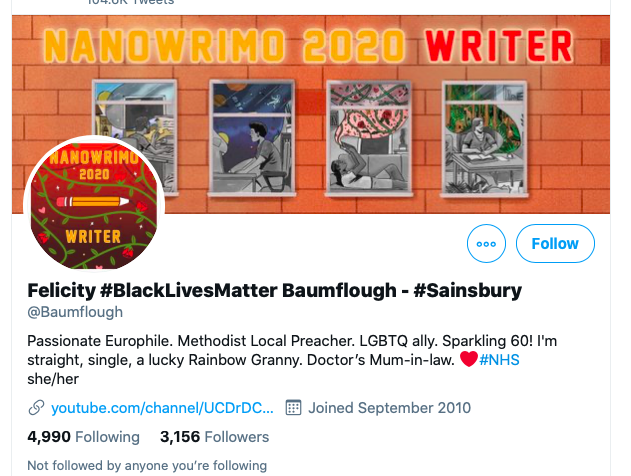