Your taxes pay for some moron in Kettering to issue this tweet boasting of how Northants Old Bill used patrol car time to stop a vehicle containing four adults to quiz them about where they were going and then issue them vast Covid fines. So could Northants Police be doing something more useful? Here are a few stats for you.

The crime rate in Northants is 143% of the National average. The annual crime rate in Northampton postcode area is 45.2, i.e. 45.2 crimes reported per annum per 1000 workday people.  Violent crime makes up 34.5% of all crimes reported in the postcode area. The total number of “violent crime” is 28,800 per annum, and this number has increased by 22.7% when compared year-over-year in the period of December 2019 – November 2020. You are safer in places such as Liverpool than you are in, largely rural, Northamptonshire.

Yet the force has time to go and clock folks for breaking Covid rules by driving to McDonalds and then to tweet about it. Some in the Police seem to be really enjoying the lockdown. Meanwhile, the rest of us think of another reason to increasingly despise the rozzers. 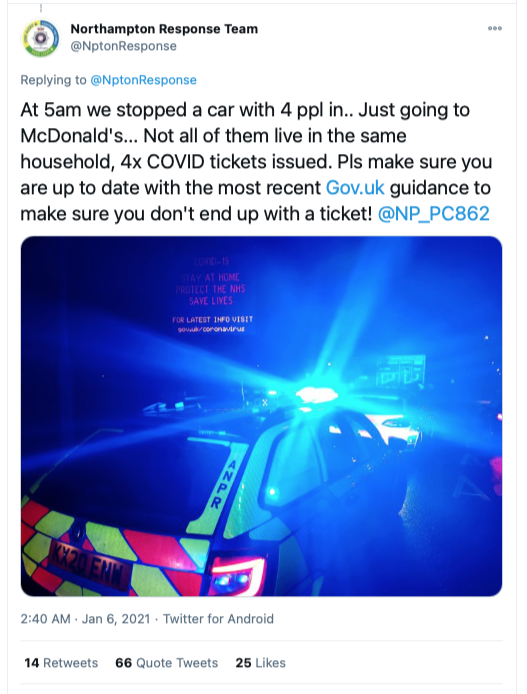