Now big media, Facebook, comes for Ron Paul... stop pretending this is about anything other than gagging dissent

To we libertarians former Congressman Dr Ron Paul is our idol. The good doctor has campaigned against pointless US wars, for sound money and budget responsibility, against the Patriot Act and for free speech and to protect the constitution for years. In recent times he has questioned the efficacy of masks and lockdown but also suggested that the damage they cause to liberty and the economy is not worth it. He is a good guy. He is not inciting violence, he abhors it. He is a brave voice often castigated by his own Party, the Republicans, and one that should be heard. But facebook does not want that voice heard. Big tech is now deciding who can or cannot question Government but it is only libertarians and conservatives who it is muzzling.

Many on the left cheer this fascist oppression because those suffering today are its opponents. It is just as George Orwell described in the little read introduction to Animal Farm.  Those on the left cheering this expose their own moral bankruptcy and should remember that one day, the precedents set in 1984, oops I meant 2021, may be used against them 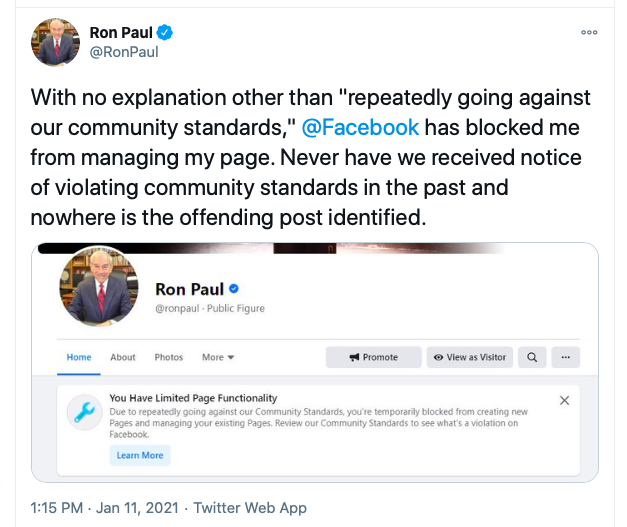