Photo Article from the Welsh Hovel: The strawberries are about to get neighbours

I am not sure if you can see but the strawberry patch I created last year in the near top field at the Welsh Hovel has been tidied up. The patch already has 108 plants but is still only half full and Joshua can eat only so many strawberries. Thus, work has continued on the rest of the area, although my role is, again, largely managerial.

The plan is to turn the remainder of this area into a herb garden. Three plants were bought on my birthday breakout to England and the remaining ones should arrive by post this week. The plan is to plant through holes made in the covering which will otherwise act as a weed suppressant. Given that this area was under 5 foot high ferns and other weeds just two years ago, there are a stack of weed seeds leftover so I think this sounds like a cunning plan.

Behind the strawberry patch there is a steep slope down to the paddock between our farmyard barns and the main fields. It was used as a dumping ground for tyres, asbestos and all sorts of horrors and also had a series of metal sheds, the removal of which is – bar the one structure you can see – almost complete.  That paddock is flooded far less often than the main fields by the river and we do have some grand plans for it 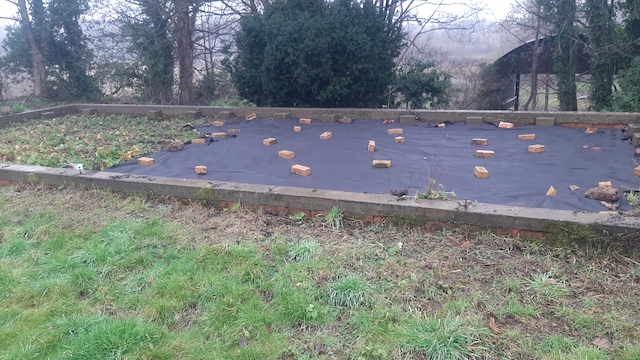