If you want to watch TV news in the UK, your choice is essentially the BBC, ITV, Sky or Channel 4 “fake” News. All were overtly anti-Brexit, anti-Trump and are left-leaning – the presenters do not hide their views. On a range of issues including the bogus religion of global warming, the demands of the Trans community, the “largely peaceful” riots of BLM and the need to mask up everywhere and not challenge lockdown, the broadcast media sings from the same hymn sheet. For many of us who supported Brexit, don’t want our teenage daughter sharing a post basketball shower with a six foot girl with a beard and a cock called Barry, who – like just under half the Yanks – supported Trump or who might have voted Tory last time (apologies to folks here in Wrexham, I do regret it), there is no news broadcaster for us. Andrew Neil will soon launch GB News.

The Left do not like it. Stop Funding Hate, a group supported by such luminaries of the woke left as Owen Jones and Ash Sarkar, has previously tried to get advertisers to boycott the Daily Mail because they find it outrageous that the Mail makes a profit while their own, tax-dodging Guardian racks up whopping losses each year. That is because fewer and fewer people want to read little Owen and Polly Toynbee in the Guardian. But although its readership is slipping, folks do like reading Peter Hitchens, Richard Littlejohn et al so the Mail is well read. Ultimately, however much little Jones shrieks, advertisers will place their ads in papers that are read. They have twigged that Jones and Stop Funding hate speak for a small, if vocal, minority who don’t like free speech unless it is in support of their own daft views.

Now Stop Funding hate wants folks to tell their cell phone companies that they will switch accounts if they advertise on GB News and to tell other advertisers that they risk a boycott if they also back Neil’s channel.  Commercial reality will once again hold sway. The BBC, ITV, Sky and Channel 4 Fake News can battle it out for the UK’s left-leaning viewers (maybe 50% of the population) while the rest of us watch GB News. Guess what advertisers will do?

That this pitiful campaign will fail is not in doubt. But what is shocking is that so many on the left wish to mount it in the first place. There is no evidence at all that GB News will be hateful. It is almost as if some on the left were afraid that having one broadcaster challenge their own GroupThink narrative on so many issues might actually mean that some of the dirty peasantry will actually join in that challenge. 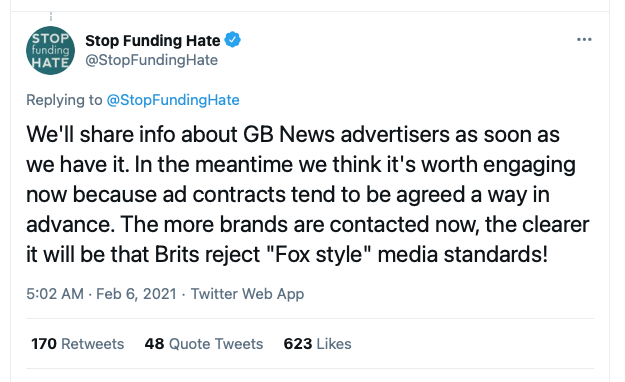