Do you remember Muriel from The Tube back in the early eighties? Since then she has made millions from the BBC but more importantly from setting up a production company which she merged with that of BBC star Kirsty Wark which got a shed load of work from the BBC and which was then sold for £12 million. Lovely jubbly.

Some folks live in another world and with every utterance make it clear how they despise those of us who do not and who resent having to fund the smug left-leaning news and turgid, woke comedies, chat shows and dramas that the State Broadcaster churns out. Muriel tweeted this comment below justifying an increase in the BBC license fee.

Why shouldn’t the BBC threaten us all with jail if we do not pay an additional £1.50 a year towards Zoe Ball’s £1.3 million salary, Muriel asks, after all Netflix has just increased what it charges by £2 a month?  Of course Netflix is voluntary and if you don’t want to watch it, it will not threaten you with the bailiffs if you don’t pay it.  That Muriel cannot see the difference shows the smug sense of entitlement of those who suckle at the nipples of the loathsome Corporation. Muriel Gray is yet another reason to #DefundTheBBC 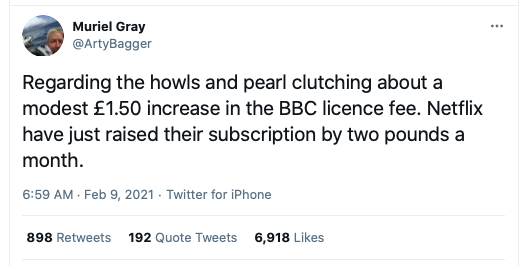