Thanks to your generosity as a taxpayer, Sheffield Hallam University discovers trans folk trapped at home by public lavatories

The reason that university lecturers need long holidays is that they can publish research. The more research they publish, the more funding their university gets so the more they get promoted. Being a good and dedicated teacher really is not part of this process. Of course, all research must be peer group approved to get published and in the woke culture at Britain’s Marxist madrassas I guess you know what that leads to. So let’s go to Sheffield Hallam University where taxpayer cash has been wisely invested in a gender driven study of public toilets.

Specifically, it is to arrive at the conclusion that their structure as they stand can lead to transgender folks being so anxious that they are quite literally imprisoned in their own houses finding it “impossible” to leave. Of course. Whatever you say.

As you wrote your self-assessment cheque a couple of weeks ago, I am sure that the pain would have been eased by the knowledge that your cash was being spent so widely on projects such as this.

The academic responsible is a woman, Jen Slater, but wishes to be referred to in gender terms as “they, them” and her job title is “Reader in queer disability studies + education” in the Education Department at Hallam. Jen’s interests are, according to her Twitter profile, “Rainbows, institutions & bad EDI” and she is a “Queer trans non-binary parent” whatever that is. The most interesting part of her Twitter profile is evidence that she really has majored in on toilets She is part of a big “Toilet politics” group which can be found on Twitter @cctoilettalk , Around The Toilet, where 1,360 folks, no doubt all sucking on the public sector nipple, engage in “Cross-disciplinary, arts-based research projects exploring the toilet as a place of exclusion+belonging”.

Thank God that in the face of evil Tory austerity, such valuable work has not only survived but is flourishing. 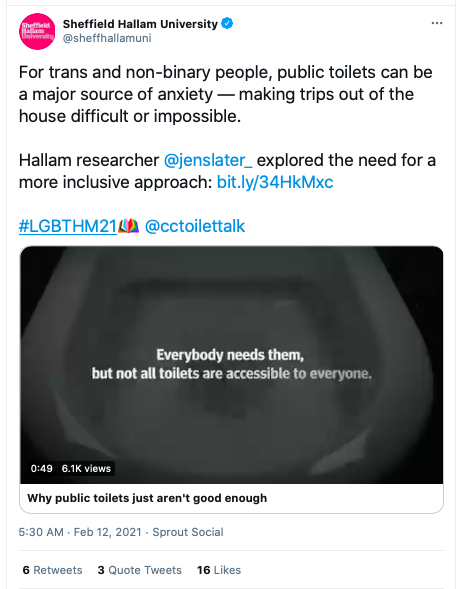