A dark day for the ACLU - it serves up fake facts, natch it is the transgender debate

The American Civil Liberties Union has a proud one hundred year history. It has been a heroic organisation that those of us who care about liberties can only but admire without reservation. Until today that is and a Twitter outburst which marks its darkest hour.

The glories of its role in delivering civil rights, in ending segregation, in protecting innocent American Japanese harassed and rounded up for no good reason after Pearl Harbor and even in defending the rights of a handful of Nazi nutjobs to march through Skokie Illinois, an area where a good number of holocaust survivors lived. The ACLU recognised that loathsome though the Nazis were, if you banned them, who would be banned next? In the end, the Nazis were shown to be small in number and very stupid, the exposure they got discredited them. So the ACLU are heroes but now it has waded into the trans athletes in women’s sport debate and is, to put it bluntly, lying and looking daft. 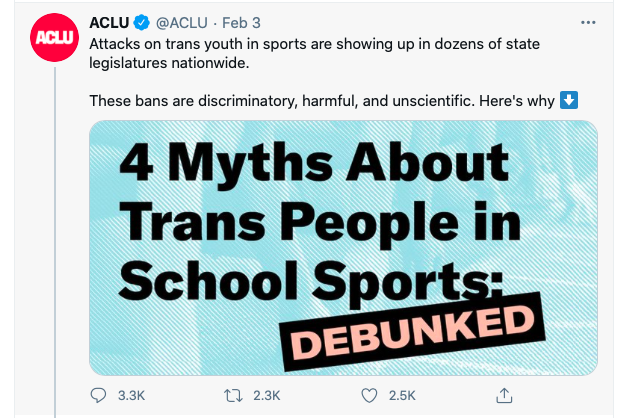 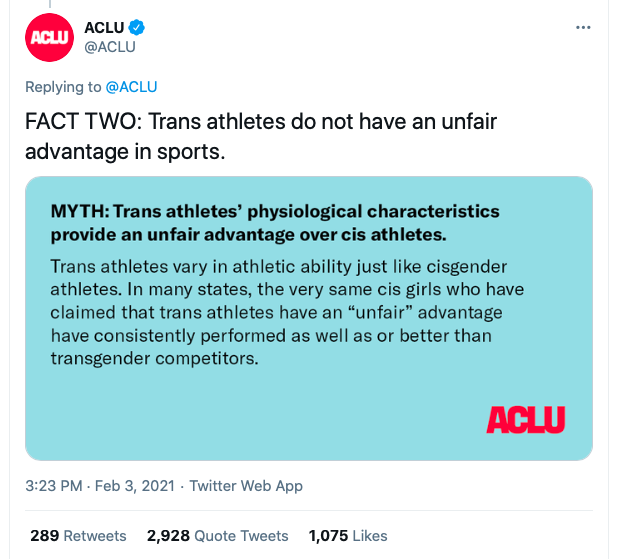 A “fact” is something that has happened so cannot be denied. What the ACLU offers up above is in fact a demonstrable non fact, a lie. Of course, some blokes who transition will be weaker than some women. If I were to transition to being a woman I think we can all agree that, aged 53 and being a tad overweight, I might struggle to compete in top level women’s sport.

But on the other hand, right now there are 300 male athletes competing in High School contests in America who have recorded faster times over 400 metres than the fastest woman in the world. If even one in a hundred of those chaps transitioned, the gold, silver and bronze medals of all women’s sprint competitions going forward would not go to what the ACLU would term cis women. That is a fact.

The World Rugby organisation did a study into this and found that trans athletes were – even if they took hormone suppressants – faster and stronger than cis-women and that them playing in matches against women born as women upped the chances of the female rugger players getting inured by 30%. These are facts based on scientific studies with real data.

Merely stating the opinion that if Tom Winnifrith transitioned he would still be a poor asset for a women’s sporting team does not prove that trans athletes as whole can compete with women and that it would be a level playing field. It is certainly not a FACT and although I would not argue with the opinion about my utility for a second, it is a given, you cannot from one case make a general rule. And an opinion is never a FACT. The times of the 300 teen males over 400 metres, the injury stats from the Rugby Union are FACTS.

These days the ACLU is uber woke. I wonder if it would take the same line as it did in 1978 if the Skokie episode came up again today. In wading into the trans debate, it is impossible not to offend someone but you would have hoped that the ACLU would not sink to serving up utterly fake “facts” to make its point.