Joshua’s dinosaur Easter Egg arrived c/o Amazon the Wednesday before Easter and within 48 hours of order. But the one for the Mrs arrived late in the afternoon of Easter Sunday. I opened the box when I returned home from Woodlarks training walk number 3, 16 miles of pain, and I was already in a foul mood thanks to the purple window when I discovered an egg that had more than half melted, as you can see below.  It was too late to find a replacement but the Mrs was surprisingly understanding as I had prepared three amazing suppers for what was also her Birthday weekend and some spectacular brunches. So notwithstanding one stand up row with a mad lefty pal of hers who was staying for the weekend, I was in the good books of the boss and she empathised on the egg. But it got worse from there as far as Amazon is concerned.

I filled in the form for a refund and was told to print out a label and that the egg would be collected the next business day (Tuesday) and I would get a refund 5-7 days after. I was a Good German and left the egg with label in the porch where Amazon delivers everything in a socially distanced manner. I returned from my father’s house late on Wednesday and the fucking egg was still there. By Thursday night it was still not collected and, tracking collection on Amazon, I saw that it was due to have happened 48 hours previously. It just had not.

Tweeting Amazon to point out its manifest failings, I was sent a link where I talked to a robot which concluded that my parcel would be collected the next business day and I’d get a refund 5-7 days later. It asked if I was happy with that response or would I prefer to speak to a human being. Oddly enough, as I spat out a few more nails, it was the latter. A few minutes later, I was chatting to a pleasant Indian bird and she tells me that my refund will arrive in 5-7 days and that Amazon will not bother collecting the melted egg.  So fingers crossed I get my money back.

But overall, how would I rate Amazon for delivering an Easter Egg very late on Easter day (i.e too late), one that was not fit for consumption and for failing to organise a refund as it should have done? Assuming I get my cashback late next week, I will have lent Amazon £15.99 interest-free for 11 days. Amazon has a vast cash pile. I do not. Why should its crap service mean that I get to add to its working capital in this way? It is all terribly unsatisfactory. 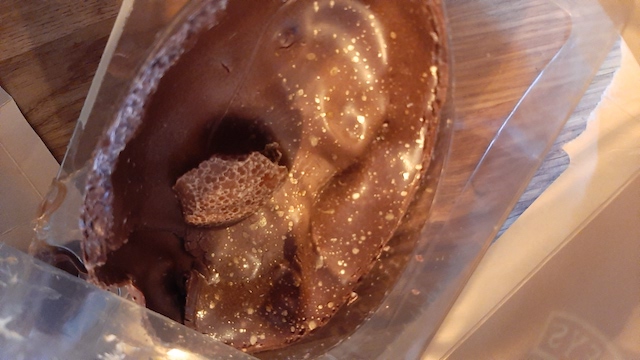