What did the wretched Canadians do to deserve Justin Trudeau as their leader? The man who wears his Eid socks to the Pride Parade, or is it the other way round, is a virtue signalling loon par excellence. His latest outburst is on the gender unemployment gap.

In the socialist paradise of Canada, between 2007 and 2019 male unemployment was, every single month, higher than female unemployment. You don’t need a PHD in dressing up in blackface as part of your multicultural awareness education to know that this is down to the growth of service industries and the decline of manufacturing. But did Trudeau think this gender unemployment gap was worthy of comment? Er…no.

Then came lockdown, which Trudeau has embraced with enthusiasm and which hit certain service sectors like hospitality the hardest and, guess what? Females were hit harder than men.

When Trudeau sorts out his vaccination efforts ( 2.8% fully vaccinated against 29% in the USA or 20% here in the UK) he will stop relying on lockdowns ( which have not worked anyway) and folks in the hardest hit industries will get back to work. Trudeau caused female unemployment to rise more sharply than male unemployment but he will not solve it by just spend, spend, spend.

What has Canada done to deserve this clown, wearing a mask even on twitter so as not to spread Covid electronically. 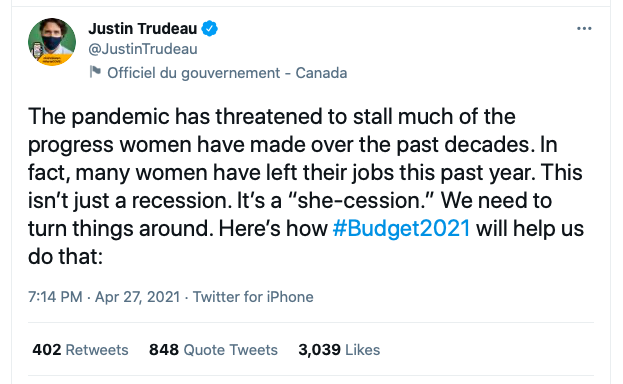