The wretched Tory MP for Wrexham, Sarah Atherton, plunges to a new low on Afghanistan

I have already apologised to the people of Wrexham for being one of those voting in Tory Sarah Atherton as our MP, in a seat Labour had held since 1935. If I could cast my ballot again, I would. To make amends, as Ms. Atherton serves up ever more reasons why she is unfit to be the town dog catcher let alone our MP, I shall chronicle her idiocy and sheer wretchnedness here. To make this manageable, I shall write up only her most horrific announcements. Today’s tweet on Afghanistan passes the test. Gosh she is despicable.

Atherton has shown herself adept at clambering the greasy pole by displaying utter loyalty to her party and sycophancy to its leaders and hence she retweets the latest empty words of Boris Johnson as if they were a combination of Churchillian wit and Gladstonian gravitas. Somehow Ms Atherton thinks that we should, as a nation, be celebrating our departure from Afghanistan as some sort of triumph.

Well, I suppose, at least Pen “fucking” Farthing and his 200 dogs and cats made it out. But as for 150 of our fellow citizens and many hundreds of Afghans who assisted us over the past two decades and their families… they are stuck in Kabul and now face persecution and, in many cases, death at the hands of the Taliban. Three Brits of Afghan origin were blown up outside the airport on Thursday as they tried to get out. At least they died instantaneously. Our interpreters and their families who we have abandoned may not be so lucky. What has happened cannot be dressed up as anything other than a disaster and a day of shame for our nation.

Yet Ms Atherton drapes herself in the Union Flag, urges us to shout out for our, clearly brave, servicemen and servicewomen on the ground and to celebrate what we have achieved. 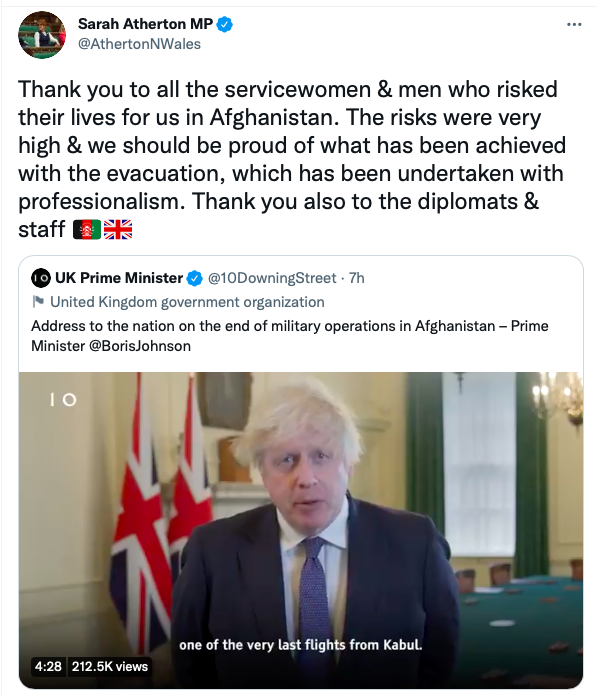