The folly of the industrial-scale corruption of so many teachers is revealed today with more taxpayers’ cash being pissed away as universities are forced to bribe students to stay away.

A level grades were in the second year of teacher assessment even more “impressive” than in the first year as the chart below shows. Since most of those assessed had second rate, largely online, learning for most of the course, this is not a reflection of hard-working teachers (no sniggering at the back please) working even harder or of kids getting ever cleverer. This is about industrial-scale corruption by teachers in how they assessed their pupils which has delivered rampant grade inflation.

In making this point again, might I encourage those teachers out there who did not study logic in a philosophy course at Oxford to hesitate before sending me an email accusing me of slating ALL teachers. What I note is not that all teachers have been corrupt. Clearly most have not. But the scale of the uplift in grades indicates that a material number have corrupted the system.

One result of this debasement of grades is that far more students are meeting the grades they needed to get a place at their chosen university than the universities had expected. And so today, the TV pundit Sophie Corcoran reveals that she, like many others, has been offered £5,000 to defer her place at Durham for a year.

For universities claiming to be cash-strapped but unable to handle the number of successful candidates they are set to face having to write out cheques like this is the last thing they need. Worse still, it means that some of those heading to universities will be folks who in normal years would not have got the grades as they were probably not academically gifted enough to flourish at a particular institution. But now they are in and may find it hard and struggle before being handed a 2-1 like everybody else at the end.

A levels and those in charge of them are not fit for purpose. I’d imagine that the better universities are now considering going back to a system of 4th term exam and interview and a 2E offer for those who cut the mustard. Of course that will give public school educated boys and girls who, in the old days, were specifically tutored for Oxbridge, an unfair advantage. And that is clearly not desirable.

It is a mess and the teaching profession needs to ‘fess up and admit the big part too many of its members played in creating it. 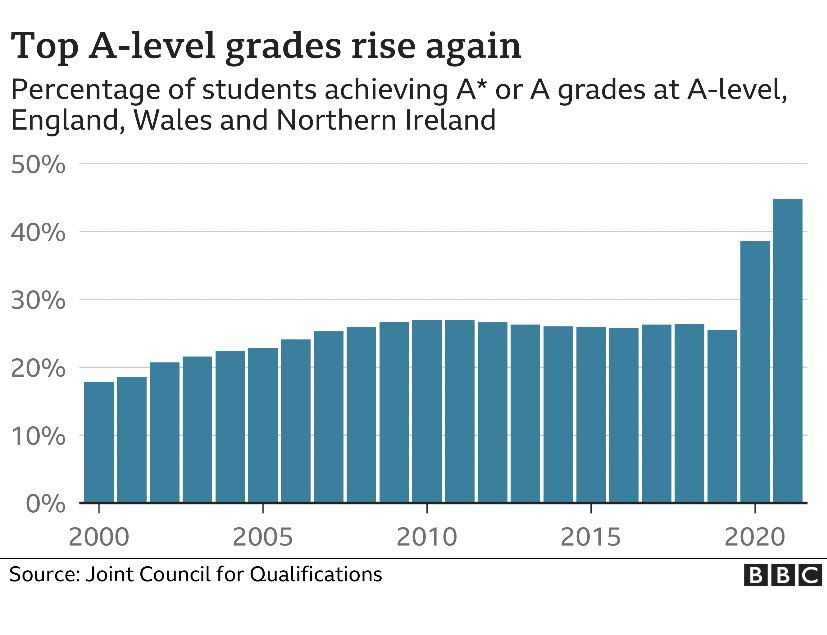