How the BBC reports global warming these days - China sees 116 year snow record: A Delta minus for logic

As the wretched MPs in Airstrip One, take time off from congratulating their local community for the amazing Diwali lights, to urge us all to switch off our Christmas decorations to prevent climate change, I see that a City in China is reporting its worst snowfall in 116 years. So what logical contortions do the high priests of the global warming cult, the ghastly BBC, go through in reporting this all? The Ministry of Truth will be handing out bonuses for this effort.

In the first twenty years of the global warming “emergency”, those two decades after the scietific consensus changed from predicting a new ice age to warning that we would all fry, climate change was rarely mentioned. The threat was global warming. Experts, notably at UEA, produced detailed models of how the world was going to heat up. By 2000 one expert chillingly predicted that kids would, within a few years, not know what snow looked like. Of course the models have all been completely wrong and my five year old son has seen snow every winter he can remember. He loves the stuff.  But the experts can still not be challenged. This is Airstrip One and Big Brother, or rather his latest wife, is a cult member.

And so to Shenyang in North Eastern China where a snowstorm starting on Sunday had seen global warming at depths not seen for 116 years.  Folks like the Doom Goblin Greta Thunberg and Carrie Antoinette the de facto ruler of Airstrip One think we need to take radical steps to fight global warming including pushing up the prices of fossil fuels with green taxes. That will end up depriving the poor, not the rich, of the ability to heat their homes so some oiks will freeze to death as has happened in China. But they are common people not millionaires like the Doom Goblin, Carrie and their friends so who cares?

The BBC argues that this huge snowfall in fact strengthens the case of the climate alarmists, all hail David Attenborough. Because it is extreme weather and that shows how man is changing the planet. Extreme weather is getting worse. Right. I see. So what about 1905 in Shenyang? This snowfall is the worst for 116 years so 1905 was even greater and that was before all this global warming malarky started. What caused that?

Of course the answer is God, or as the Godless heathens at the BBC might put it if they thought logically, nature. It is winter and sometimes the snows are very deep. It happens.

Here in the UK the coldest and snowiest winter in living memory was in 1947 which is well before the era of man made climate change as was 1962-3 which was actually colder. But it was extreme weather so what caused it? The BBC might say there were already carbon emissions then. Ok.  So I now refer you to the excellent “The history of British winters” written by D.Fauvell and I.Simpson. We could go back to 1635 when the Thames froze over and that was followed in 1636 by a severe drought. Cripes, a lot of extreme weather then. As a bonus for extreme weather event spotters, by 1638 there was a plague of tornadoes in the South West. But let’s move on a bit:

“1683-84: Now when people think of ‘The Big One’ in terms of winters, they think of 1947,1963 etc. But there was one winter that easily surpassed both! This winter! Mid December saw the ‘great frost’ start in the UK and Central Europe. The Thames was frozen all the way up to London Bridge by early January 1684. The frost was claimed to be the longest on record, and probably was. It lasted kept the Thames frozen for 2 months, it froze as deep as 11 inches. Near Manchester, the ground had frozen to 27 inches, and in Somerset, to an astonishing 4 feet! This winter was the coldest in the CET series, at -1.2! (1739-40 was -0.4) This winter was described by R.D. Blackmore, in his book ‘Lorna Doone’. In mid February there was a thaw.

1690-99: 6 out of 10 of the winters in this period were described as severe, judging by their CET. Meaning their average temperatures for December, January, February and March were below 3c. 1694-95 heralded deep snow, with falls of continual snow affecting London. This lasted for 5 weeks, along with the freezing of the Thames. This heavy snow and frost theme, continued for a good long while. In fact 1695 is believed to have been one of the coldest years ever recorded, the severe snowy winter ended around mid April, at which time arctic sea ice had extended around the entire coast of Iceland! 1695-96 saw -23c (?) in the UK. A severe winter. The autumn of 1697 was very cold, with snow persisting, and ice forming. The winter of 1697-98 was severe, with a CET of about 1c. Snow and ice built up. Ice on coasts built up to 8 inches in parts. Spring very cold. Generally the late 1600s were very cold, and people probably were affected very badly by this. The cold probably brought famine to the poor, as livestock perished, and crops failed. And without central heating, it must have been unbearable in parts. The ‘Little Ice Age’ lived up to its name. The final few years weren’t as bad, but harvests were still ruined generally as wet weather took over from the cold.“

What is described above is extreme weather. Therewere no doubt many bigger snowfalls in Shenyang than that of 1905. They too would be extreme weather but cannot be used as evidence of man made climate change since they, like 1905, predate the era when that, according to the cultists, started. Not that cult members such as the entire BBC editorial team care about actual logic or history. All hail David Attenborough. 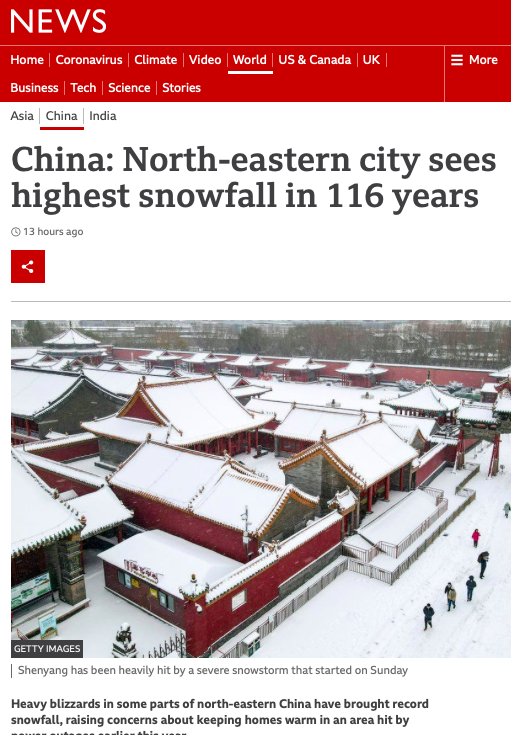