Kyle Rittenhouse: How the liberal political and media elites tried and failed to frame a white man for racist killings (of white men)

The British media is, not surprisingly, full of footage of folks in Brooklyn and a few other urban liberal ghettos for posh folk, rioting and attacking cops because Kyle Rittenhouse was acquitted of what they term a racist killing. Yes the two men who died were white but logic, proportion and the truth died a long time ago on the left. You will not be shown how in real America, in the flyover states, in the suburbs and in the small towns there are no riots because folks agree with the jury system and because the jury bravely defied political and media lies and pressure to reach the right verdict. But you will not be told about this. Never. You will be told this is a stor about gun ownership, white supremacy, racism  and injustice.

In the summer of 2020 a black guy, Joseph Blake, was shot and injured by a cop who claimed that he feared Blake was set to attack him. Natch, in the febrile atmosphere of last summer Blake became a poster boy for the Black Lives Matter movement and in the own where this happened, Kenosha Wisconsin, rioting broke out. BLM ignored the fact that Blake had a warrant out for his arrest for sexual assault and disorderly conduct based on domestic abuse. There was no #Metoo in play here, the cops must be wrong. They always are.

In the end the cop was not charged and the charges against Blake were dropped in return for a plea bargain, him admitting to other less serious offences.  But back to August 2020. There were mostly peaceful protests during the days after the shootings but at night Kenosha was ablaze as stores, apartments and vehicles were set on fire. A state of emergency was called and the National Guard drafted in and joining them were armed civilians, hundreds of them, out there to protect properties.  There is video footage showing cops on the ground thanking the armed civilians and giving them water.

On night three August 25 one such civilian shot two rioters dead and injured a third- all three were white.  But by linking the rioters with BLM daytime protesters the liberal elite was able to say that this was a racist crime, though few – like the ghastly Independent newspaper below – actually say those Kyle shot were actually black. That is 100% fake news. Does anyone seriously read the Indy any more?

However, Hollywood celebs, the press and Joe Biden and leading Dems keen to tar President Trump to a racist crime all made the link between the shooting and a racist crime. They also smeared Kyle by saying he carried a weapon illegally across a state line ( he did not), that he was not legally allowed to have such a weapon ( he was), that his old mum was part of the conspiracy ( she was not) and that those shot were heroic civil rights activists (they were not, though BLM was still putting up posters throughout the trial beatifying the Kenosha three and claiming they were heroes.

The assailant Kyle Rittenhouse, a 17 year old man may not be the brightest spark on this planet but his argument is one of self defence. First let us look at the three men he shot. Does their CV of crime below, including the fellow who anally raped five boys aged less than 11, look like that of your typical Civil Rights activist? These were career violent criminals out for a night of looting, assault and arson. 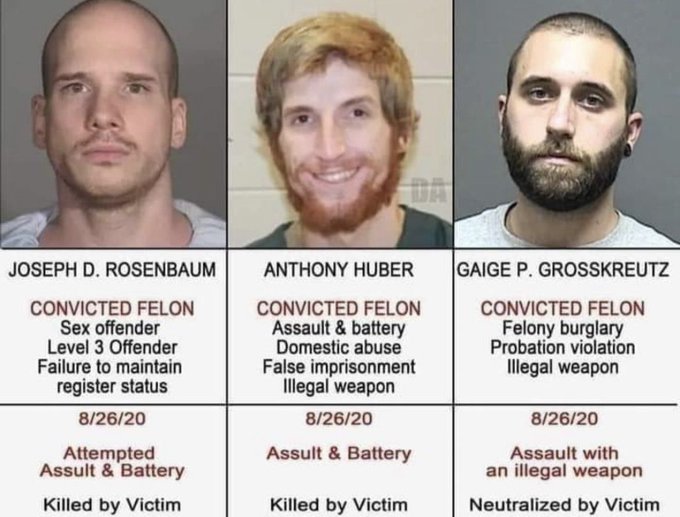 One of the three told Rittenhouse earlier that evening that he would kill him as he stood guard by a garage he said he was protecting which was owned by his grandparents.  Then, later, he charged toward Rittenhouse who shot him in self-defence.  As Rittenhouse ran, he tripped and a second man started battering him with a skateboard. Rittenhouse defended himself and shot him dead.  The third admitted in court that he then pulled a handgun on Rittenhouse and pointed it towards him, Rittenhouse shot and wounded this fellow.

The gun Rittenhouse had was legal. The gun the third man had was unlicensed and illegal. The British press never understand an America awash with guns.The bans they propose would see folks like Rittenhouse disarmed but career felons like Gaige GrossKreutz using illegal guns as per normal.

The press tell you that Kyle travelled across state lines, albeit only 20 miles, from where his mum lived. What they neglect to mention is that his Dad, grandparents and nearly all of his family live in Kenosha. It was his home town.

There is not one bit of evidence linking Rittenhouse to the far right to all white extremist groups or indeed anything political at all.  When Biden and other leading Dems as well as the MSM made that claim repeatedly they did so with no proof but to smear him and by association President Trump. So what if this might influence a jury it was only white trash who stood accused. In the trial itself the prosecution made no such assertions as it knew there were no links. Even today some on the liberal left continue to smear Rittenhouse in this way.

The jury heard the facts and somehow managed to blot all those repeated lies about the alt-right white supremacist, carrying a weapon he was not allowed to use across state lines assisted by his mum to go shoot brave BLM activists.  And they concluded this was self-defence and found Mr Rittenhouse not guilty of all charges.

So what if there is no double jeopardy in America, the celebs demanded a retrial under Federal laws as he had carried a weapon across state lines – which he had not – while others said this showed why jury trials should be dropped in some cases. Actually, this trial shows exactly why jury trials should never be dropped. 12 sensible brave folks in Kenosha stood up for the truth and against all the lies those on the left told and so ensured that Kyle did not spend his whole life in jail.

What of those Kyle shot?  They are not heroes. They are not activists. That they can be depicted as such when they are clearly vile career criminals shows just how distorted the values of the liberal left and the mainstream media have become. Let’s be honest: the world is no worse place for their departure.

What now? More protests/riots by those just seeking an excuse. There will be no apologies from the media, from Biden or the Hollywood folks warming up for the annual applause of child rapist Roman Polanski at the Oscars. Such a “brave” man. One might hope that Rittenhouse starts suing a few of them for defamation, starting with the President and CNN. We shall see. But, over here in Airstrip One, you won’t be hearing any of the real facts, which see most Americans standing with Rittenhouse, from our established media. Instead this will be seen as just another indictment of gun ownership and of the racist white trash supporters of Donald Trump and that is all that you will be told.