Defacing statues - the BBC cannot have it both ways

The BBC, the Police and others equivocated on the clearing of the four criminals who pulled down the statue of slave trader turned philanthropist Edward Colston and threw it into the waters of Bristol harbour. “On the one hand but on the other hand” argued the state funded broadcaster and others on the left.  Most of us simply said that the law had been broken and it was not up to individuals to decide what could be defaced or destroyed on the grounds that it offended them.

Yesterday a statue outside the BBC was defaced. There is nothing wrong with the art but the man who created it was a monster. After his death we discovered that Eric Gill had enjoyed sex with his sisters, daughters and also the family dog.

As it happens the husband of my godmother, the sculptor Donald Potter, trained with Gill for six years. There is no suggestion that Donald was anything other than a wonderful artist and human being. He created the gravestones of my mother, aunt and grandparents and I remember him and my godmother with great affection. I loved visiting his studio home in Bryanston.

Gill was an evil rotter. That, however, does not make his art worthy of destruction. For where do we set limits? I see that Normal Mailer was cancelled this week because a snowflake at Penguin objected to his 1957 esay “the white Negro.” Back in the 50s and 60s that word was the word used by all folks, including the politically correct to describe people of colour. Times and words change but Mailer using it in 1957 does not make him a racist. Except in 2022 it does.

Should we burn all paintings by Caravaggio ,a man who committed murder? How about we erase from history the works of George Orwell, a man who made remarks about “nancy” homosexuals and a string of comments which were clearly anti semitic. Think of the cartoonish figure of Emmanuel Goldstein: Streicher would have been proud of it.  Yes let’s erase Orwell from history so that nobody might be triggered by reading such ghastly works as 1984 and Animal Farm.

Of course I jest, lest any snowflake out there think I am serious and start demanding that as the clock strkes 13 we all burn all our Orwell books in solidarity with the LGBTQA+ community. The point is that art is art and books are books and should be judged accordingly. We should be free to discuss the foiles of those who create them but a Gill sculpture is not itself a peadophile or indeed a cry to legitimise what is foul. It is just a work of art and – in the case of what was outside the BBC – a jolly good one.

But folks like Katie Razzall and her comrades among the bien pensants have, with the Bristol Colston case, helped created a monster, the idea that because one is triggered by an object there is a possible defence in destroying it, that someohow the criminal law no longer applies. It should always apply. For the alternative affords no protection to private property or to the liberty to speak out through art or literature.

I hope we all despoise Gill as aman but if we care about liberty we should support, without question, a law which protects his work. 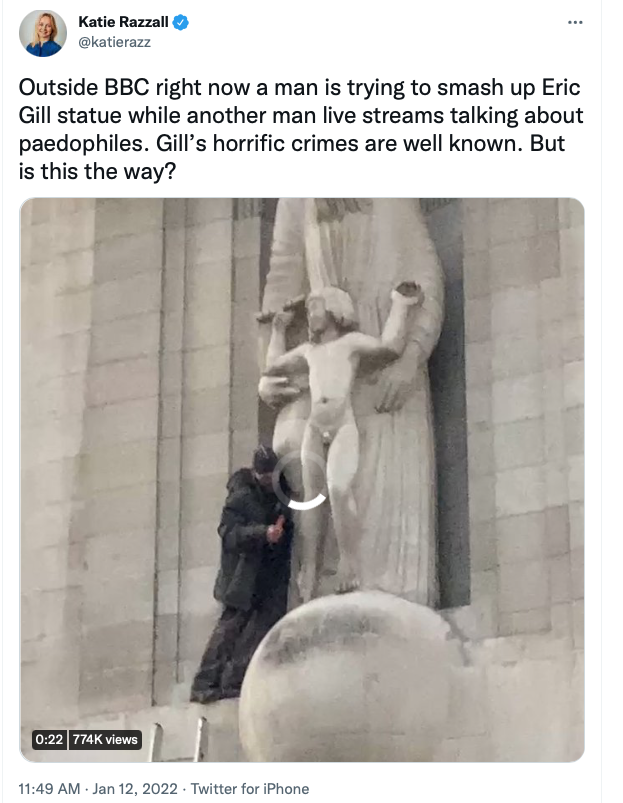