On June 11, I, along with seven other rogue bloggers, will walk the 34 miles from Winchester Cathedral to Woodlarks. I can now say that, after yesterday’s training effort of 23 miles, I will complete the walk. But that is three weeks away, so now is the time to sponsor me, HERE. As a means of encouragement, let me tell you about yesterday’s pain, and show you the reason: the cows, or bulls, as they were advertised.

I set the alarm for 4 AM and, natch, hit the snooze button when the phone rang at that ungodly hour. At 4.05, the Mrs suggested that I should stop procrastinating and booted me out of bed. I procrastinated a little more downstairs, filling my bag with fluids and pondering life. But just before 5 AM, I headed off, meeting a dog walker as I crossed the bridge over the Dee. We agreed that it was a nice morning, which it was, and I headed along the English bank towards Chester. That was the last soul I saw for three hours.

The going was firm, so no mud to wade through, and I made normal points of note – 1 hour, 2 hours, 3 hours etc – in record time. I spotted the church below at 2 hours 36 minutes, though it is normally just past the three-hour mark. 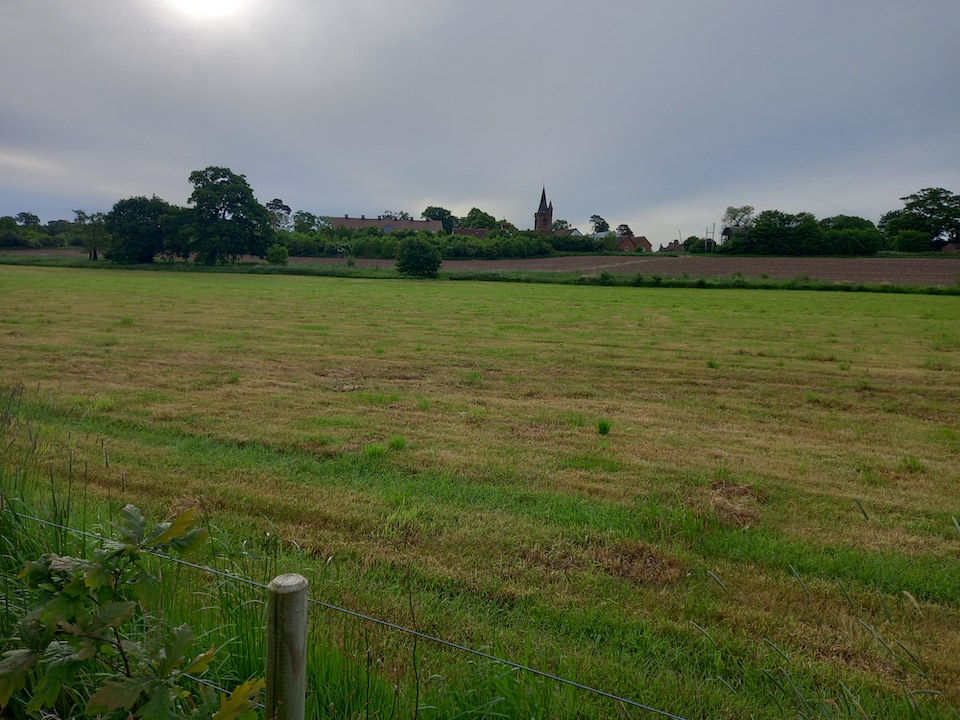 It was only as I crossed back across the Dee, so with the Duke of Westminster’s Estates on my right that I started meeting the odd dog walker as, amazingly, I was getting quite close to Chester. I opted to do an extra minute or two so that I could actually touch the Chester by-pass and started heading back at 8.34 AM confident that I’d be home before one PM, after eleven miles I do tend to slow a bit. I was delayed by chatting to Nick from Woodlarks and sending him the picture below and discussing the wild garlic, the smell of which was everywhere. 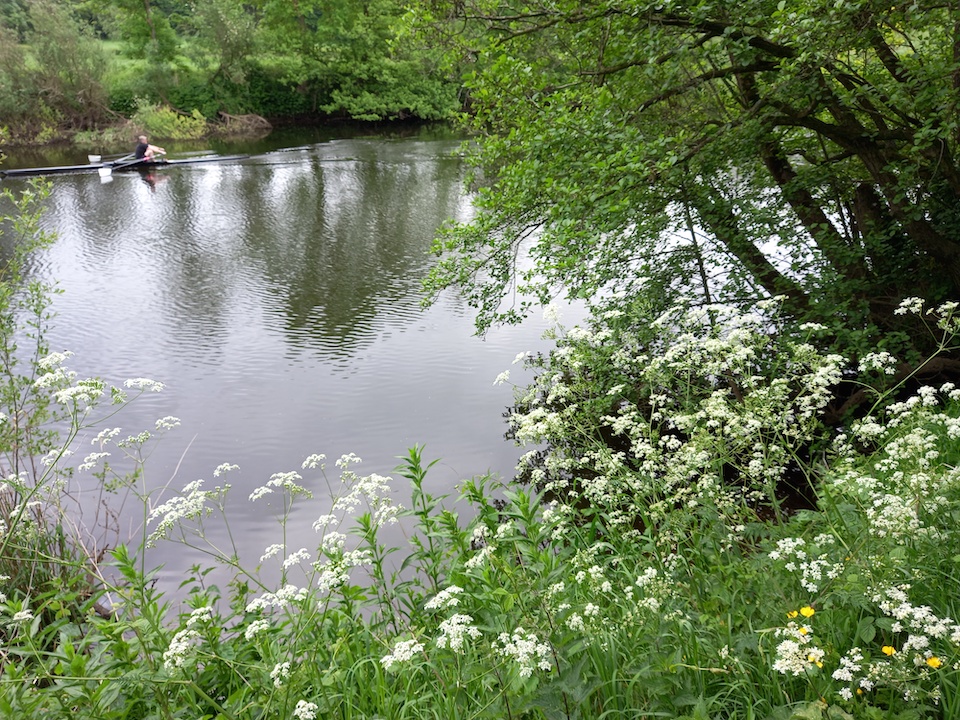 But I marched on and kept a reasonable pace until I came to a big long field about three miles from home with a sign at the Chester end saying “beware of the bulls.” I had spotted the creatures on my way out towards Chester but they were ambling on the far side and I walked on the near side, where a fence with two strands of barbed wire separates the field from a fairly steep river bank covered with nettles. Maybe the bulls will stay away from me, I told myself, more in hope than belief, and strode on. But, about 800 yards from the end of the field, I found my path blocked by a herd of bulls. “Shoo” I said defiantly. But instead of fleeing, the herd came towards me so that I felt that I had no choice but to climb under the barbed wire and wade through waist-high nettles on an uneven surface until I had passed the bulls.

But they simply followed me along the river on the other side of the fence, cutting off any escape back to the field.

An old countryman in a hat and carrying a stick walked in the field towards me and the bulls. Are these yours? I asked. No said he. But are you not afraid of the bulls? I asked. He put me straight. They were heifers but he said that when not coming to say hello they could charge after people.  That is why I shall stay on this side I said smugly and the man strode off, no doubt laughing to himself about the posh twit who, he knew, was minutes from his downfall.

The cows followed me until I came, as the countryman must have known that I would, to an enormous bramble bush stretching from the wire down to the river. The cows crowded to the wire. I was not going to slither under it to among their very large feet which they stamped as if irate. I could have waited for rescue but that could have taken all day.  So I started to climb through a half opening in the bush.

By the time I was on the other side, I was bleeding from cuts up and down my forearms. But that was only the appetizer.

I then discovered that I was in nettles six feet high. I tried to proceed by treading on the stems of some and walking in the space cleared. I slipped and tumbled down the bank stopping just short of the water with my bag in front of me and my glasses on the ground. I had to push myself up by putting my hands on crushed nettles. Slowly I clambered up the bank and found a large branch to both bat back nettles and to prop myself up so that I did not fall again. At the top, there were the ffing cows (advertised as bulls) staring at me again.

Luckily, by the time I reached the end of the field the cows had lost interest in me. I climbed under the wire and headed home which I still made well before 1 PM. As a one-time professional chain smoker, I can say that I was never out of breath. My feet and legs ached a bit but not so much that I could not have done another ten miles as I will do on the 11th.  So that is all well and good.  I am ready for the Woodlarks challenge. I suppose my intense gardening here at the Welsh hovel has actually made me a bit fitter.

But I was in agony. My arms were buzzing and stinging as if thousands of ants were crawling all over them. The blood had just about stopped flowing when I got home but there are cuts and grazes across my arms. I did some lawn mowing until the Mrs pitched up with some pills supplied by her mother, a retired Shipman, and she sent me to bed until the pain eased and I could be sent off to make supper.

So think of that pain, remember that Woodlarks is an amazing cause and please donate HERE 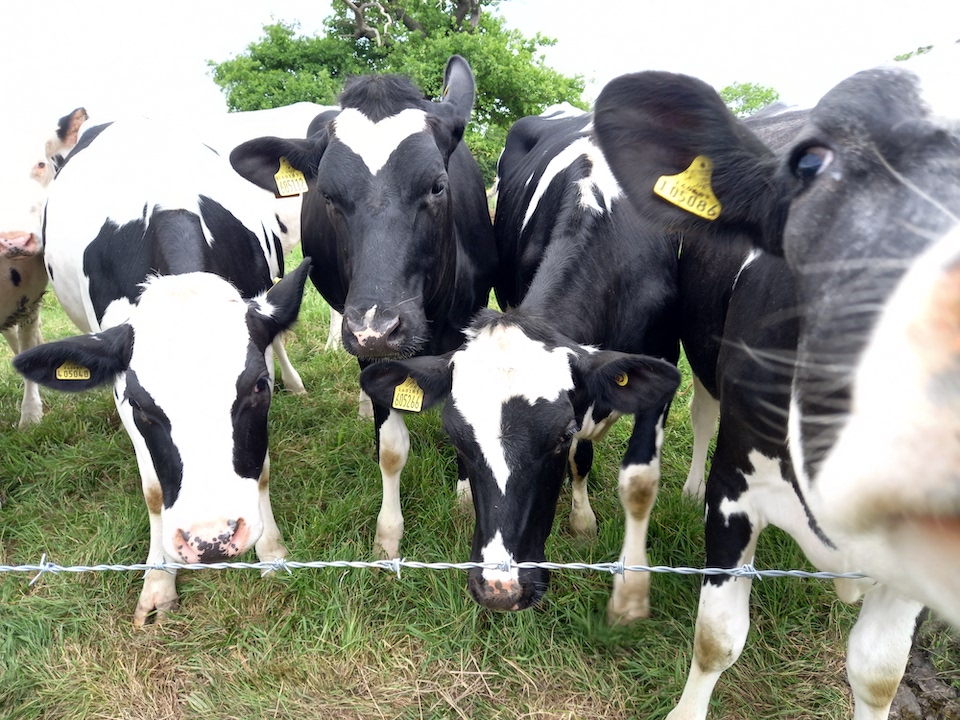