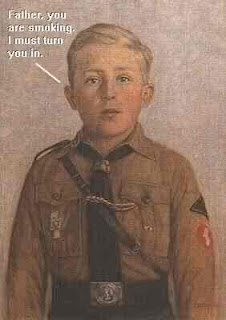 Education secretary Michael Gove is introducing cooking lessons at school so that by the time they hit sixteen all kids can cook at least 20 meals. Whatever. I hope it works. But he is now considering implementing a proposal to ban kids from bringing packed lunches or leaving the school at lunchtime so forcing them to eat healthy school meals. Gove you are becoming a health fascist. And moreover it will not work.

The average packed lunch contains – we are told – one sandwich, a chocolate bar, a packet of crisps and an apple which is usually put back in the box again after going back home uneaten. Gove wishes to force patents to spend the cash they spend on junk lunch boxes on school meals instead.

Let’s start with economics. A school meal costs £175-£2.25 depending on where you live. Really poor kids get free meals already. But what about kids from low earning families? One can assemble that lunch box above if one buys from Tesco online multipacks for less than £1. Middle class families probably spend more on the lunch boxes than low earners and it will thus be low earners who will be whacked by the Gove stealth tax.

Once again middle class health fascists impose a regressive tax to mould society to a shape of their liking. But the unintended consequence is to make welfare more attractive and working for a low wage less attractive. Over a year a £5 a week stealth tax per child adds up if your family earns £20,000 (pre tax).

And of course of school meals are charged out at £2 a pop and offer real food then once one takes account of wages for staff, depreciation on kitchen equipment, free meals for poor kids etc it is unlikely that the taxpayer will actually make any money from providing universal school meals. In fact this exercise will just add to the deficit.

Will it alter parental behaviour or eating patterns? Not really. Those parents who mainline their kids on junk food will still offer a breakfast of chocolate cocoa pops. They then get a meal at school which might be healthy but at £2 a pop it will not be that great. It’s then back home for turkey twizzlers coke, sweets and ice cream. Five healthy meals a week out of 21 meals plus snacking won’t stop kids getting fat.

So the plan won’t work, it will penalise poor folks who have opted to work rather than live on welfare and it will add to the budget deficit in Bankrupt Britain. Mr Gove: Health fascism is always wrong but this plan is patently more barking mad than most.