I met this amazing woman late last night in Kambos

It was the night of referendum day and, having enjoyed a relatively late meal at Miranda's I drove slowly home to the Greek Hovel at well after ten, a time when it is pitch dark. Three hundred yards along the main street that winds through Kambos and I turned right into the small road that leads out of the village towards the abandoned monastery, then onto snake hill and the track through the olive groves to the hovel

That small road hits a tiny church after about fifty yards before turning sharply left and within another 100 yards it is out of the village and away from any form of street lighting. Even the area around this tiny church is poorly lit. With a big new modern church elsewhere and an older main church in the centre of Kambos I imagined that this one, plus two or three other tiny churches in the village, had been long abandoned. 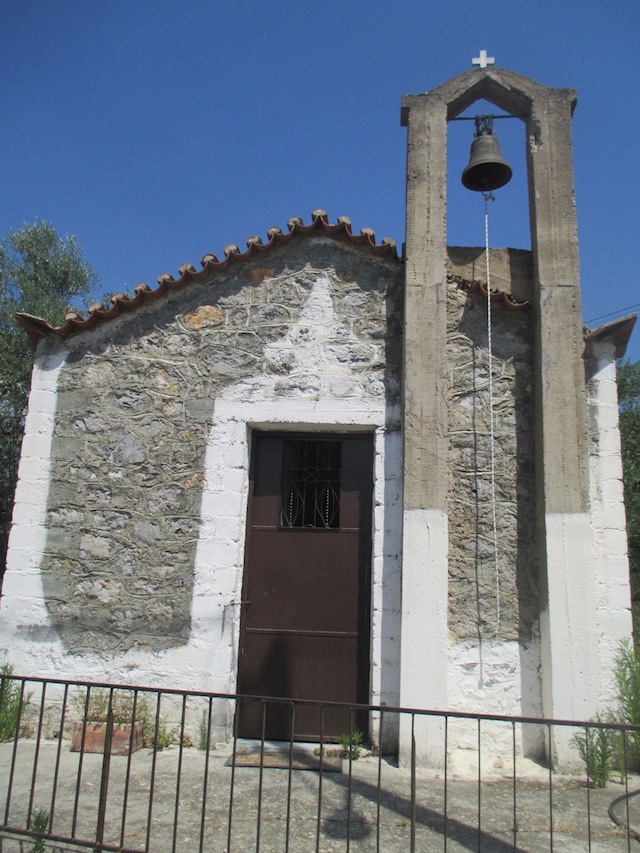 But inside I saw light. I stopped my car and wandered up and there was a woman, an elderly lady of perhaps sixty with a thin drawn face and wearing a shawl over her head. That would be the sort of shawl I remember Greek women wearing, out of respect when in churches, from my youth, from years gone by in the Pindus mountains of Northern Greece.

I asked in English if I might come in. There is no reason why she would understand for in this village very few folks speak anything other than Greek but she answered "you are English, come in". Filling one side of the church were eleven wooden chairs and a plastic beach chair. All around the church were paintings, icons. The lady was lighting candles at a small make-shift alter on the other side.

I asked if the church was used? She said that it was, for mass twice a year on the days of the two Saints that it is named after. So if you are in town on July 29 and November 9 this is where to go for a most unusual mass. I am sad that I shall miss both of these masses this year. The lady goes to the church to clean, to light a candle and to ensure that it is safe every week.

But I knew that I had seen her before, walking through the dark up to the deserted monastery and so asked her about that building which looms over the valley floor. It will keep the name "deserted monastery" but was, in fact, a convent. The last nun died two years ago and this lady goes there to keep it clean, light candles and to ensure that it is ready should another nun arrive. I fear none will but I just do not have her faith.

The lady asked where I lived. I explained. It is peaceful up there she said. Yes, just me and the snakes I replied and we laughed. I left and I continue, two days later, to marvel at her faith and devotion. She keeps the convent ready for new nuns who - everything tells me as a rational analyst - will never arrive. She maintains a church used just twice a year. She walks along dark roads, surrounded by wildlife diversity, in the service of God seeking no reward, her faith driving her on without apparent fear. She smiles, laughs and seems more than content with her lot, her duties and her life. Maybe she is not but, to me, she radiated happiness and contentment.

As we struggle with our complicated and messy existences shuffling papers back in Britain do we glow as this woman did? Do we give off that impression? Could we even feign contentment? You may say that what she does has no purpose but she believes that it does. Do we believe that what we do achieves anything other than funding our consumerist existence? Does we achieve anything of real import?

One day, of course, this woman will go to a better place. Will there be a replacement from the next generation to maintain the Church, to keep the convent ready for another nun who will never arrive? Maybe there might be in this part of Greece. but the generation after that? Somehow I doubt it. The era when pious Christian devotion was such a central part of our lives here in the West is, sadly, I fear, drawing to a close.

No doubt those on the progressive left who snear and dismiss the Christian religion above all other religions as a barbarous relic followed by the old and the stupid, like Euroscepticism and other discredited value sets, will welcome the end of this era after two thousand years. If I am around, I shall not. I may not have faith and in my actions I know that I shall be found wanting but it is a value set that one can aspire to. And those who do have the faith are so often folks one can admire. The value set of modernity and post religious consumerism does not attract me and its icons are not folks I can admire.

I shall think more of this amazing woman as, all too soon, I find myself heading back to England.

In today’s bearcast I discuss how little shorting actually takes place on the AIM Casino, I look at Eurasia (EUA) where the slience is deafening, Versarien (VRS) and at Hammerson (HMSO) where Andrew Monk should thank me for warning him off but should NOT be tempted to bottom fish after the dividend is cut this week. And 8% yield, post cut, is still illusory. Finally, I again ask you to sponsor the , now 5, Rogue Bloggers for Woodlarks HERE