Photo article: The most amazing woman in Kambos blows me out on the hot date

It is one of the charms of Greece that if one makes an appointment for 7.30 PM on Friday in really means any time between Wednesday and Sunday afternoon. It was in that spirit that I prepared for my date with the most amazing woman to be shown around the deserted monastery, actually a convent, which sits on the other side of the valley from the Greek Hovel. As the crow flies it is actually my nearest neighbour and, as you can see, it is a pretty impressive building. 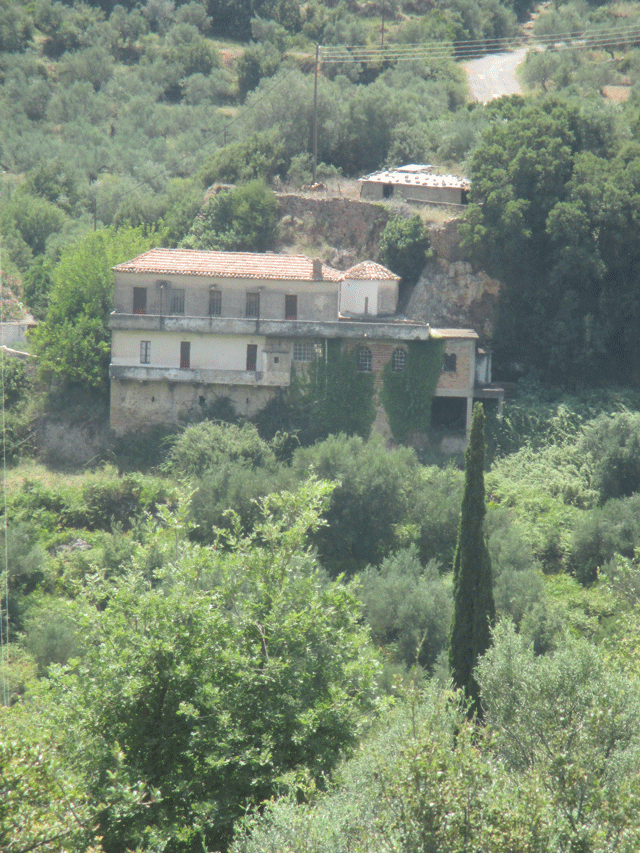 It was my last evening at the hovel and so, to show respect to the woman but also ahead of seeing the Mrs for the first time in three weeks, I tried to shave but with no mirror I removed not only three weeks growth but also good chunks of flesh. As I stepped into my shower, that is to say under the hosepipe, I was bleeding profusely and the water stung. Notwithstanding the still bleeding cheek and jawbone, I looked reasonably smart as I drove down my side of the valley across the dry river and up from the valley floor to the top of monastery hill. Instead of carrying on for another mile or so into Kambos I swung right to where one can enter the convent. It was 7 PM and I thought I should be early. 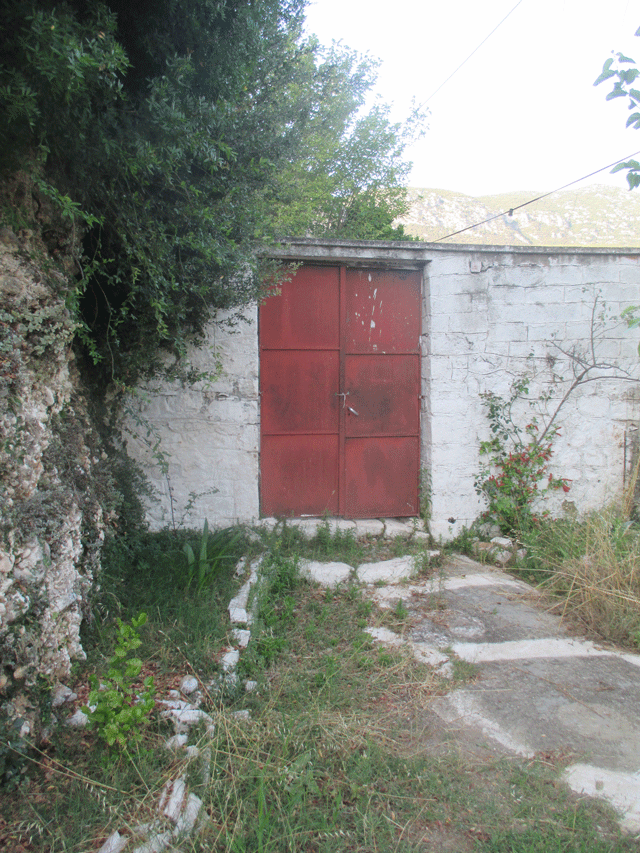 I waited patiently until 8.30 PM at which point I conceded that I had been blown out and untied the string that keeps the front gate closed. Feeling rather nervous ,as I was an intruder, I entered a small courtyard. It is maintained well with neat flowers and on one side of the path there was a gravestone. It was the last resting place of the last nun to live at the convent a woman who must have been fairly old when she died. 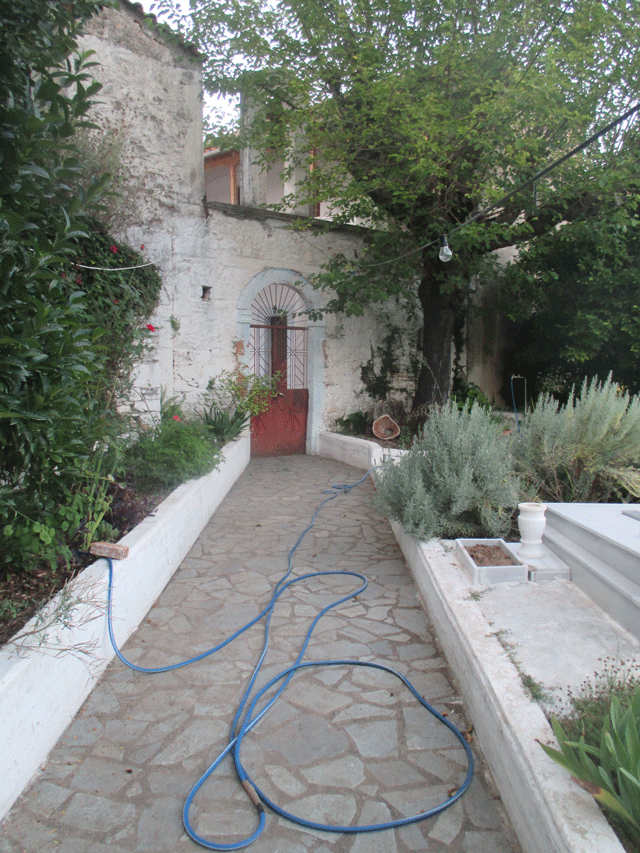 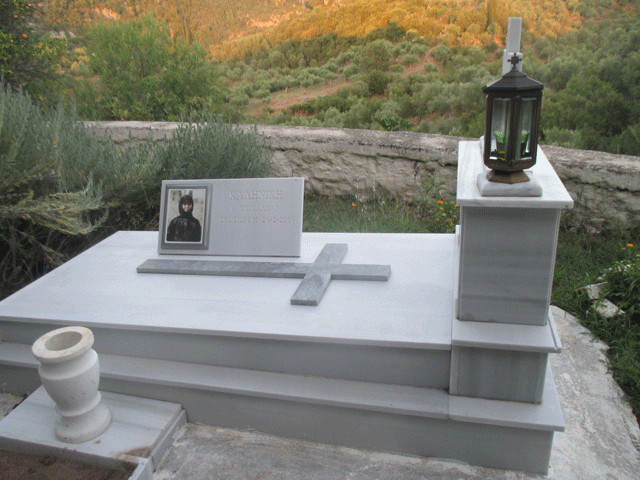 Her death was about eight weeks before The Mrs and I first visited the hovel and the village of Kambos. I still do not know whether this little old lady of faith died alone at the convent where she must have lived by herself for many years or whether she was elsewhere at the end or with others. Whatever faith she had to sustain her in her final years out in this isolated place I hope that at the end she also had human company.

The Courtyard was only about six yards long and at the end was another wall and another iron gate. This one was locked with a padlock and chain. As such I could only peer through to another small courtyard. On one side is a small house where perhaps two or three nuns could have lived. On the other side the accommodation building with another 15-18 cells and at the end a small church.

At one stage those cells would have been bustling. This would have been a vibrant community. With water at the spring that lies at the bottom of the valley, into which the dry river flows creating a large pond in winter, and surrounded by fields for the nuns to tend this was once a real self sustaining community. Now the area around the convent grows wild. Only the amazing lady from Kambos keeps nature at bay from the inner sanctuaries of the site and one wonders if there is another generation to act as the convent's defender in this way? I fear there won't be.

The amazing lady has faith that there will be nuns there again one day. If there are I would beg to assist them with their olives or in hacking back the frigana which is advancing upon the buildings. But I do not expect to get that chance for I have no faith that the nuns will return. I suspect that the last nun of Kambos is the one lying in the grave in the courtyard. 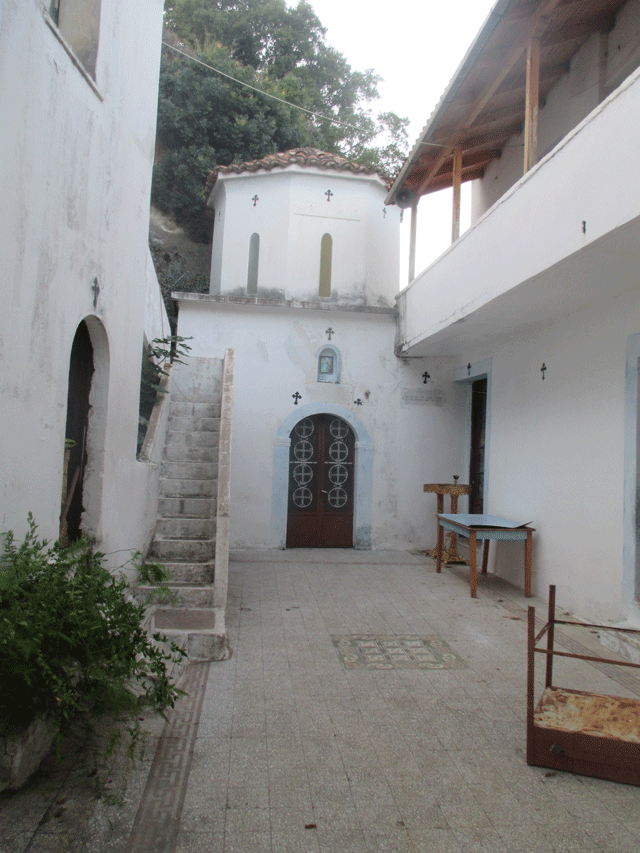 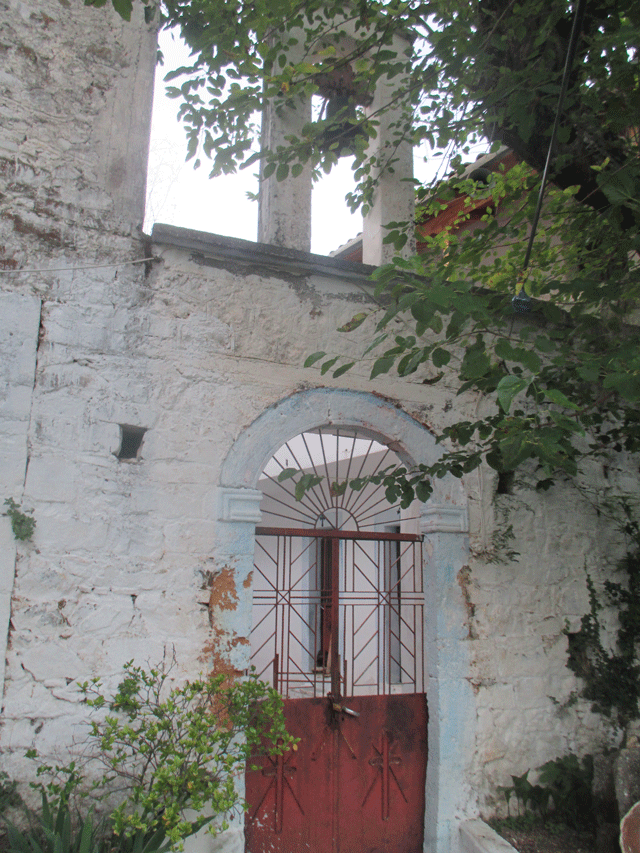 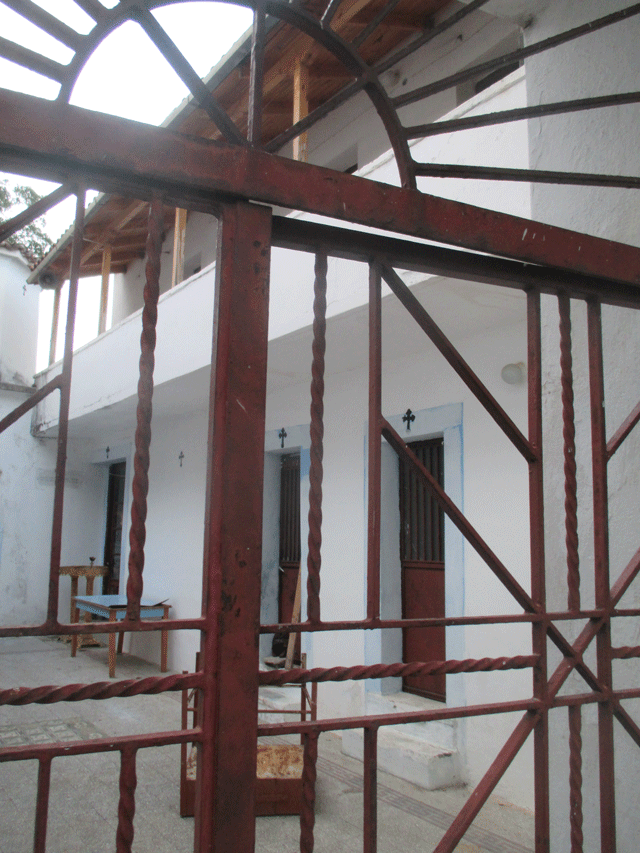