Tom Winnifrith Bearcast: Recording in what seems like a sauna to avoid the snakes

I write from the Kouronis taverna in Kambos where, in the middle of a violent thunderstorm, worthy of Byron at Zitsa, it is sheeting it down. I recorded 90 minutes ago in what seemed like a sauna. All is explained in the podcast which covers Air Partner (AIR), Premaitha (NIPT), a fraud on the Mrs, Akers Biosciences (AKR) and Transense Technologies (TRT). Myself and Brokerman Dan have now raised more than £5,000, including gift aid, for our charity walk on July 28. But 96% of Bearcast listeners are yet to chip in, I am sure you can all spare a tenner so please donate NOW HERE. To those who have donated already, thank you.

The storm - no olive harvesting today

If I was Byron, seperated from Hobhouse at Zitsa, i would be dashing off some verse after last night. But I'm not. i sit alone in my Kalamta hotel looking out at roads that look like the infamous Japanese Grand Prix where Lauda retired gifting James Hunt the world championship. It all started last night with loud bangs which I worried might be a bomb or a ship crashing into the harbour next to the hotel.

Shortly after the Mrs agreed to buy the Greek Hovel we got an email from the most excellent estate agent Susan Shimmin of the Real Mani suggesting that there was a small lake at the bottom of the valley which one must cross before climbing snake hill. At once I had visions of stocking it with trout like the one from Metsovo I enjoyed with the amazing baker of Zitsa. Then reality kicked in.

A cooling breeze and much wanted rain at the Greek Hovel

I was woken today by the sound of heavy thunder in the tall hills to my far right and in front of me. There was no lightening and it has now abated but in those hills dark clouds still loom, indeed a fog of rain clouds are now covering those slopes directly in front of me obscuring my view. Behind me, and to my left, in the Taygetos mountains there are also dark rain clouds evident. After day after day of 40 degree heat or worse this is such a break.

Work Related Trips I’d like to do: Kosovo, Spain – any other ideas?

It I all very well sitting in my garage in Bristol or in the Greek Hovel writing about companies but it would be fascinating to actually go visit a few of them on the ground with a video camera in hand to report from the coalface. Right now that is not an option for personal reasons you know too well but next year I’ll need to clear my head and already two road trips are sort of planned.

I shall have family reasons to visit the Pindus Mountains of Northern Greece at some point. It would be great to pop in to see The Baker of Zitsa and have a glass of sparkling red wine and read some Byron while I am there. But from Zitsa it was just a horse ride for Byron and Hobhouse to Albania and would be a short drive for me to Kosovo and Macedonia (the ex-Yugoslav Republic).

The Deluded Lefty is on her way – prepare for a slowdown

Well folks, that is almost it for the writing fest. The Deluded Lefty is tonight packing her bags. Well actually, when I called just now it was quite clear that she was in a bar with her pals sipping fair trade Zimbabwean Chardonnay and blaming it all on Thatcher. But tomorrow she gets on a plane and joins me in Greece and on Sunday we are off to Albania.

As such the pace of articles is set to slow somewhat as of Friday evening as I have better things to do..like have a holiday holiday. Naturally I shall log on every day to check up on the AIM bad guys but ahead of me lie Butrint then Zitsa and Meteora. There is a mad plan being concocted by the DL to drive down to the Peloponnese. I have pointed out that this is environmentally unfriendly (as well as just plain mad) but if you get another video postcard from Monemvasia do not be entirely surprised.

One Year Old – today: A look back

It was a year ago today that the first article appeared on this blog. Most blogs fold after a period of months but I am still here. And to celebrate a glass of bubbly for breakfast! The toast “to you dear readers for continuing to read this site”

A year ago my life looked unimaginably bleak. At a personal and health level it was a mess and I was days away from leaving Rivington Street and t1ps the company I founded.  To the victors the spoils and so it was repeatedly asserted that all t1ps’ problems were of my making and that new management was turning it around. Yes I have read the interim results released at 6PM on Friday. Hmmmm. You might say that but I could not possibly comment.

That however was a former life for me. My line in the sand was drawn in September.  By then I knew who my friends were. To folks such as Richard Poulden, Abbe Aronson, Darren Atwater, Steve Moore, Clem Chambers, Monisha Varadan, Chris Potts, Amanda Van Dyke, Lucian Miers, Chris Booker and Zak Mir I am forever in your debt. To you I say “cheers” – another toast. I chatted yesterday to most of the above and life has changed pretty dramatically. At the Real Man restaurant we were losing £5,000 a month when I took it on officially in September. There is now just one of the staff at that time still working here and I have hired and fired aggressively and made a stack of other changes. Having just enjoyed our busiest Saturday in memory we are now happily making a profit, our customers like us and we serve far better food. That was achievement one. I guess that “new management line” is true sometimes. Miaow.

Achievement two was getting the UK Investor Show organised in just a few months and it went well. Now with my friends at ADVFN we are well on track to deliver an even better show on April 5 next year. And I now rather suspect we will be the only show featuring master investors happening next spring. Miaow.

But perhaps the biggest win has been in writing. It is what I do best (although I can knock out a fantastic Risotto con salsicce e funghi these days as well). The launch of the www.shareprophets.com site has exceeded expectations. After 50 days it has half as many registered users as we managed to attract in one year at UK-Analyst. More join every day. And gratifyingly more and more writers seem to want to join the team and write for us. Another two will debut this week.  Meanwhile other websites…no that is enough miaows.

But www.Tomwinnifrith.com is my real love. It started as therapy but being able to write exactly what I thought without some corporate hissy fit ensuing soon became an addictive drug. The fact that I use the odd naughty word or talk about birds does not appeal to everyone – notably Google and PR prude Kay Larsen of College Group – as you may remember here and here.

But it is me. I do use naughty words. I do find myself drifting into the vernacular of my favourite TV show (The Sweeney) now and again. And I do have strong views on Israel, welfare scroungers, the EU, global warming and civil liberties. Why hold back? I had been gagged for so long that the release was joyful and still is.

But there was also a release in that I ceased to by a City insider and became an outsider. As such there was no need to kiss arse – anyone and everyone was fair game. The past year has shown me that not only is it fun to constantly expose and poke fun and to say what you want but that I can earn a reasonable living doing that and looking after Real Man Pizza. There is no need to hold back. While I might have been tentaitive at first I am now in 5th gear and will not be slowing down or getting softer in my approach.

And so looking back I reflect on those who have brought inspiration and pleasure to me:

1. The visit to Butrint (photo article)
2. Damian Conboy of Alecto hooking up with the Playboy PR girl
3. Kay Larsen PR prude at College Hill
4. Sefton Resources & Jim Ellerton – thanks Jim you have made my year ( see you in court Bitchez)
5. Taking a contrary view on the Olympics
6. Vroula – the fascist Greek athlete and defending her right to free speech
7. The visit to the Berlin Jewish Museum
8. Standing by St Paul’s for Lady Thatcher’s funeral
9. The start of the AIM Cesspit campaign
10.Going on stage with Nigel Wray and Nick Leslau at UKInvestor show – feeling I was with friends.
11. Being complimented by the Goddess
12. The Guardian and deluded lefties everywhere
13. The Baker of Zitsa
14. Albania - National Leave your Gun at home day
15. Financial PR firms & the AIM Cesspit - another fight picked

I am sure that I have missed out a few highlights.

Thank you all for reading this website over the past year. Year two starts on Monday. What will it bring?

If that headline does not a) generate a retweet from Frazer Thompson, CEO of the excellent Chapel Down vineyard and b) attract some new first time visitors from google searches (scroll down to the bottom gents), I shall be disappointed.

I have finally made it to Zitsa. Here Byron penned verse while sheltering from a thunderstorm on the plain below. His friend Hobhouse commented on the excellent local white wine. But this place is famous not for its white but for its sparkling red, pictured below 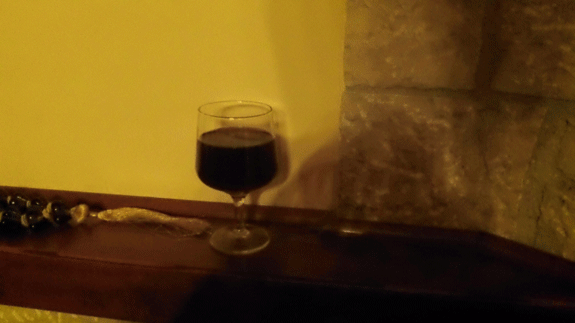 It is not fizzy like champagne but it sparkles and has a bite. It is a curious brew. I cannot quite describe it. It is dry and slightly acidic. But I have just ordered a second glass. I think it is probably an acquired taste and so I shall do my best to acquire it.