Photo Article: Day 3 of the Olive Harvest at the Greek Hovel

At about 2.30 this afternoon George the Albanian wandered over carrying the electric olive harvesting rod which I think is called a twerker. Battery kaput he said and looked unhappy. I endeavoured to look sad too but internally I was delighted because surely this meant that we could knock off early. Bar a 40 minute break to upload my Advanced Oncotherapy bombshell article and 20 minutes at lunchtime when I devoured a hunk of bread dripping in olive oil, a small piece of feta and a tomato all provided by George, I had been working hard since just after eight. And I was aching all over.

Sadly my inner joy was short-lived. George whipped out an additional old fashioned manual paddle and he and his two female associates cracked on. My heart sank.
Naturally I am still doing the jobs normally reserved for old women, that is to say carrying branches sawn off by George to the flailing machine and then sorting olives from leaves in the manual separating tray - as explained in my day one photo article HERE. The old women have been promoted to operating the flailing machine and twerking/paddling as well as laying out and collecting the mats. They are not allowed to use the chainsaw. That is man's work and by man we mean George only.

The weather was delightful as you can see in the photo of the mountain behind the Greek Hovel. The sun shone all day and it was T-shirt weather.
. 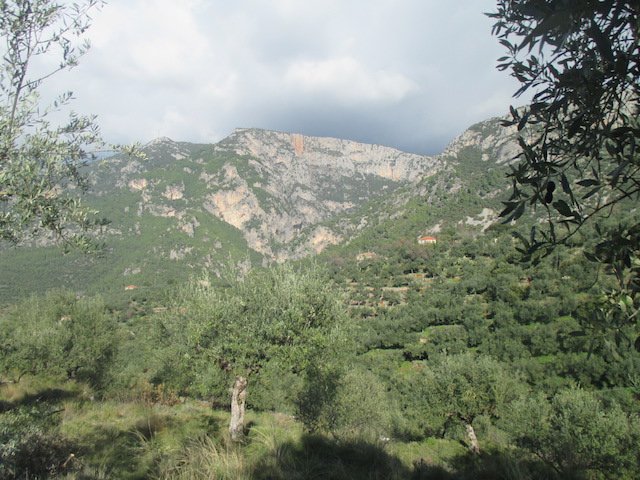 You can see the piles of branches, stripped of olives, are mounting up. The sheep love them and I must ensure my friend the shepherd gets his flock onto my land as soon as we are done. 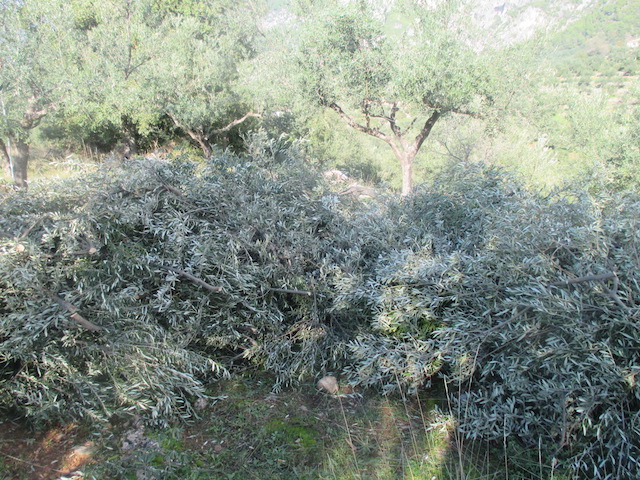 So where are we in terms of the yield. I reckon that we did at least 600 kg today which makes 1150 kg ( 1.15 metric tonnes) of olives. The photo below shows where we are up to on the land, about half way from the hovel to the small ruined house (but excluding my best trees in the fenced off area around the hovel). Beyond that house is about the same distance against from the hovel to the ruin but the trees there are fewer in number. But that is on the top level. I reckon we have done half of two terraces out of four and a half terraces. Which is my way of saying that I have not got a clue as I have never actually counted how many trees we have.

My gut instinct is that we have another three days work. The 2014 harvest ( a good one) was 1.6 tonnes. I will be gutted if we do not hit two tonnes and am dreaming about getting closer to 2.5 tonnes. If my memory serves me correctly, 2.5 tonnes would be c860 litres of olive oil. But at this stage it is al guesswork. Now time for another long hot bath and, having lasted a full day, I really think I desrerve an ouzo 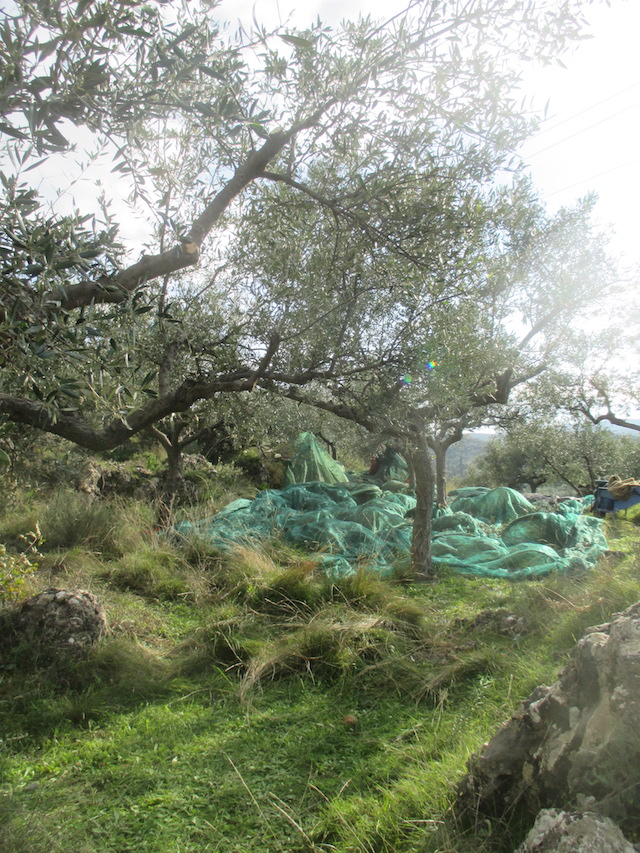