Donald Trump and the Doomsday Clock: The liberal media laps up fake news "the man will kill us all" 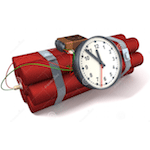 Since 1947 The Bulletin of Atomic Scientists have once a year recalibrated an imaginary Doomsday Clock tracking how close we are to midnight, the point at which man destroys the planet. To mark the election of Donald Trump the clock was pushed forward 30 seconds to two and a half minutes to midnight. How the Guardian, Channel 4 and the BBC loved it "He's going to kill us all". Did any of these screaming hysterical liberals watch the last episode of the current series of Endeavour?

It started in 1962 and the radio is playing coverage of the Cuban missile crisis. The Russian foreign minister has just announced that if Soviet ships sailing to Cuba are intercepted by the Americans - as JFK had pledged to do - this will start a global thermonuclear war. Folks who were alive in 1962 tell me that they felt terrified.

As a boy when Russia invaded Afghanistan and Reagan and Thatcher stood up to the original Evil Empire I felt scared. The Government distributed leaflets to every British household "Protect & Survive" showing how in a manner of which Blue Peter would have been proud we could all make our own bomb shelters if the sirens went off. Demand for proper bomb shelters went through the roof. That was scary.

Donald Trump says he wants to work with Russia and get along with President Putin. The Ideological divide ended with the fall of the Berlin wall. These days Russia and America have far more in common and, unlike Obama, Trump recognises that and wants Jaw Jaw not (cold) War War? So why is he a threat?

The Bulletin states that: "the United States and Russia, are currently at odds in a variety of theaters, from Syria to Ukraine to the borders of NATO". On Syria it seems that Obama was at odds, backing Al Qaeda supporting rebels, with Russia which did not back terrorists. It seems as if Mr Trump wants to join Russia in clearing terrorists from Syria. It was the former US regime that racked up tensions in the Ukraine encouraging a revolution to oust a democratically elected President and replace him with a regime which within 24 hours had made ethnic Russians feel like second class citizens, by ceasing to recognise Russia as a language. Go back to WW2 and what happened in the Ukraine for a history lesson. Did President Obama know on whose side the grandfathers of many of those he is backing fought? And what atrocities they committed. Trump wants to talk to Putin to find a solution.

The logic of the Atomic scientists is flawed, the clock should be nowhere near midnight and under Trump it should be moving backwards not forwards. Aha, but these "peer group selected scientists" have another agenda. Back in 1947 this clock was about nukes. Today the report also cites "the lack of immediate progress in fighting climate change". Aha Trump is a denier. So what if the arctic icecaps are getting bigger and global land temperatures are falling at a record pace this winter, Trump does not believe in global warming and so the world is going to burn up soon. There is no room to debate those who believe in this false religion for they act in a post fact era.

Meanwhile for the liberal media establishment it was a day to celebrate. Report the headline but do not ask is the world really so close to wipeout and so much closer than in 1962 or 1983? Of course it is not but when you pedal fake news every day what do you care about facts?