Though the candidates ranged against Madame Le Pen in the French Presidential election are truly dreadful, I must still hope that one of them triumphs. I just cannot support a member of the Le Pen family or of the Front National. The polls indicate that Madame Le Pen will win the first round easily but will almost certainly lose the second round, a playoff between the top two candidates for the first contest. But as each day goes by Le Pen's poll ratings improve. She keeps doing things that just cause her opponents to look silly. She skewers the elitists of the liberal left on their own double standards and the sans culottes applaud her again and again. 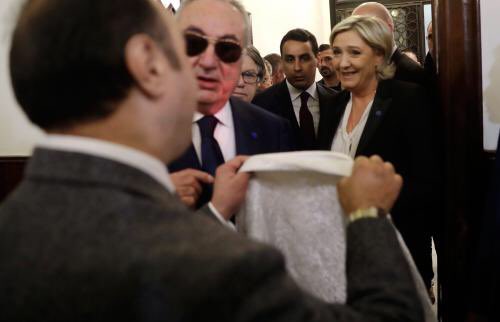 The other day when she was set to meet a Muslim cleric and was asked to war a headscarf as she entered the building. Le Pen refused and so the meeting was scrapped.

Some on the liberal left will regard this as culturally insensitive - there is only one region which the "bien pensants" believe can be dismissed as a barbaric relic and that is, of course, Christianity, all others must be respected in full. Others will (rightly) point out that women are not second class citizens and so why should they be treated as such? It is not intolerant to say that sexual discrimination is wrong and that we should not accept it just because of one interpretation of one religion.

If this was any female politician other than Le Pen most of the left would back her stand against sexism, arguing that this fight trumps the need to be culturally sensitive to backward looking religions. They would start to drone on about glass ceilings and praise her bold stance. But it is Le Pen so instead most of the left argue that she is just another racist right winger.

My sense is that most folks outside the media and political liberal elite are overwhelmingly with Madame Le Pen on this issue, I certainly am. And the trouble is that on so many other live wire issues they also back Le Pen's views. And that makes me wonder if we will see a repeat of the "shy Trump" phenomenon in the French elections.

There are, I suspect, a lot of Froggies who would not admit to a pollster that they would even consider voting for Le Pen but who find themselves agreeing with her far too often on issue after issue. How such folk vote in the privacy of the polling station is anyone's guess.