And so Martin McGuinness is dead. I welcome no death - as I explained here with reference to this unrepentant murderer of many - but equally I would agree with Norman Tebbit that old Martin is right now suffering agony in a particular part of hell reserved for the truly wicked. Martin's crime, in the eyes of St Peter and indeed many on this earth, is not so much the killing many innocent folks but a failure to accept that this was a sin, that he had sinned and to show remorse. For that McGuinness can only be viewed as evil and damned to burn in hell for eternity.

Indeed Martin went one step further in that to his miserable end, while singing the song of peace and reconciliation, he pushed for those who may or may not have committed crimes as part of the British Army to be hauled out of retirement for prosecution. Yet Martin - who killed folks personally as well as ordering many other murders - argued that for IRA killers there should be absolvement without enquiry. It was that double standard and failure to accept his own sins that made this man so especially vile and loathsome, something C4 News and the liberal media just cannot seem to accept.

In North London, among millionaire liberals who have no idea of the terror and misery that folks like McGuinness inflicted on, largely poor working class communities, and on innocent folks in both Ulster and here on the mainland, Saint Martin is lauded as a hero. He is right up there with other murdering liberal icons with blood drenched hands, Che Guevara, Fidel Castro and Yassar Arafat. If you listen to Jeremy Corbyn or to the BBC Newsroom such folks are men the world will miss, we are all the poorer without them.

That is of course rubbish. All were old men who contributed little in the last moments other than a refusal to ask God for forgiveness. None showed any remorse for the innocent men, women and children whose lives were cut short thanks to their actions. No doubt Jon Snow and his Channel 4 colleagues will give extensive coverage to the funeral of the murdering bastard McGuinness. Do they care to reflect on how IRA victims had their bodies dumped in ditches, had no bodies to bury after devastating explosions or, in some cases, have not been properly buried at all because bastards like McGuinness have refused to say where the bodies were dumped?

That McGuinness is mourned by the elite of the liberal media establishment shows again why so few of us outside the bubble of Westminster have any time at all for the deadwood press and for the State run broadcasters who sing from the same hymn sheet.  They are out of touch and, quite simply, morally bankrupt. 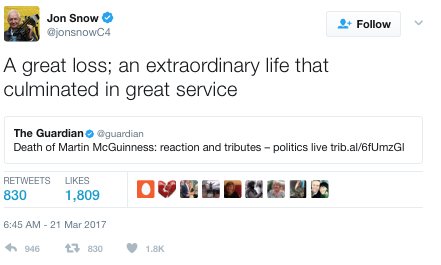