May Day, Workers Day, the Useful idiots marching sure ain't workers but are truly ignorant of history

As part of my life as an evil capitalist I risked my capital to buy a failing restaurant, worked 70 hour weeks, turned it round so saved a number of jobs. What a fucking bastard I am. How fucking selfish can you be? That restaurant was in Clerkenwell and every May Day the annual Workers March would pass by my front window leaving me gawping in amazement. For starters there were almost no members of the indigenous working class present. Instead the ranks of Kurdish Communists and the oppressed of sun Saharan Africa were swollen by thousands of members of the middle classes.

I was reminded of that Billy Bragg classic "I was a lecturer, I was a journalist, I was a pen-pusher between the wars". It was pitiful. Real workers cannot afford a day off to carry banners of Marx, Lenin and Stalin and sing the Internationale. They have mortgages and taxes to pay to fund the salaries of the public sector idlers marching in droves.

The marchers lambasted we capitalists as evil and painted themselves as victims. Hell's teeth if it is that easy to be an exploititive capitalist why don't the marchers join the millions of their fellow citizens who have risked their own capital to start their own firms and take on their evil employer head to head? Of course they will not. Risking your capital to create jobs and wealth and pay the taxes that fund the bloated State, is for evil bad people not the self proclaimed saints of the public sector ( who, of course, earn more than those in the private sector, strike more, have more days off sick, etc, etc, etc)

And my hostility does not end there. On British liberal arts campuses today Marxism is taught as a scientific theory. Okay it has been tested in the laboratory if the real world 1848-2018 and found to be total bollocks, his predictions of what would happen were all wrong and anyone who tried organising economies without the driver of greed that underpins capitalism condemned their people to poverty and misery. So as a scientific theory Marxism does not wash.

Despite this I can just about understand how a woolly minded clot might think that Marx at least had his heart in the right place and thus carry a banner of the old fraudster. But Stalin? He murdered tens of millions of his own people in the name of communism. Surely we can agree that he was a total bastard responsible for well over a third of the 100 million human being slaughtered in the name of this ludicrous philosophy? Well it seems not, banners of Stalin fluttered over Clerkenwell too as they do every year.

The moral bankruptcy of celebrating a bastard like Stalin mixes with the intellectual bankruptcy of supporting a scientific theory that is a proven failure. No wonder that ordinary decent working class folks were so noticeably absent. Only middle class lefties, insulated from the reality of real hardship themselves and despising anyone who works hard to make a better life for themselves, could be so foolish as to take part in such a parade as they celebrate their victimhood once again. 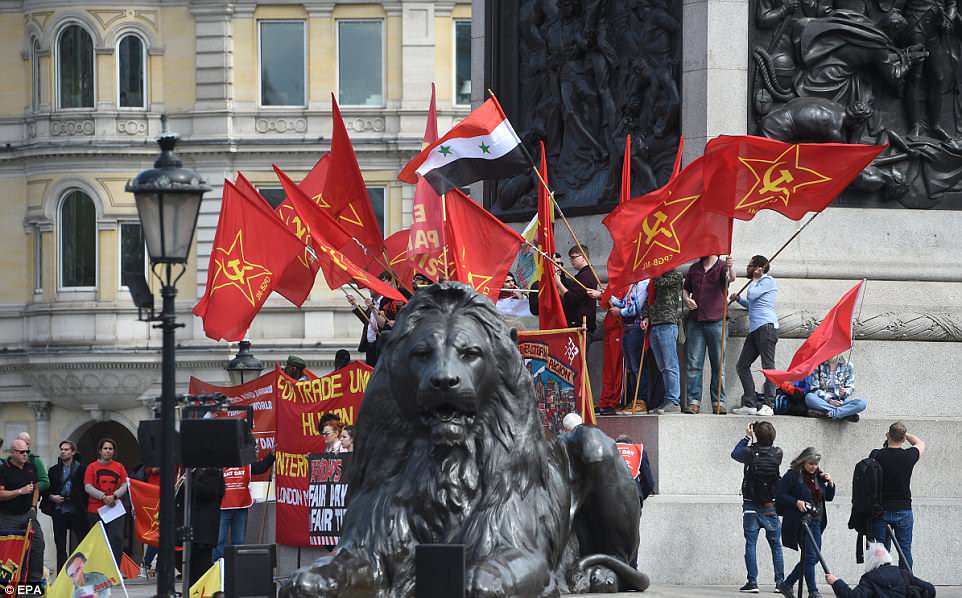