Photo article: It is all familiar faces back in Kambos and up at the Greek Hovel

If you head to a seaside settlement in the Mani right now whether it be Islington-sur-Mer (kardamili) or the Costa-del-Stoupa they will be packed with people. Head there in the winter and they are semi-deserted. Up here in the lower reaches of the Taygetos mountains, in unfashionable old Kambos, the population barely changes throughout the year. The faces I see when harvesting olives in November are, essentially, those I see now in the burning heat of August.

Sure there are a few seasonal visitors. Poor Nicho the Communist, Papou, a man several years older than I am, has been saddled by his sister with two young nephews from Athens. He brings them to the Kourounis taverna of lovely Eleni where they play mindless games on their tablet with the other kids. Poor Nicho, a “moderate drinker” in the same way as the late Charles Kennedy, orders another large whisky and sits there resigned to his fate.

But most of the folks in Kambos are all year rounders.  My first stop in the village was naturally at one of the two hardware stores to stock up on snake repellent canisters and to teat myself to a new saw and axe as my old ones appear to have been lost in the building works. 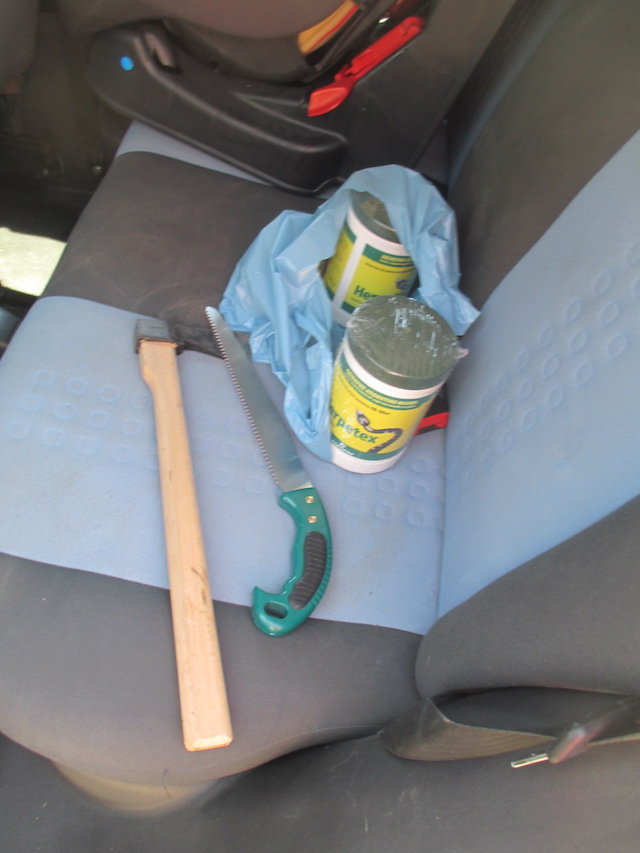 My olive trees are pretty clean having been thoroughly pruned in May and re-pruned in June but the rain of July has seen new sprouts emerging and so a re-cleaning exercise is called for and is now underway. 250 trees – almost for weeks so ten a day will do me fine. Yesterday I did twelve but even early in the morning it is jolly hot and so I’m not planning to spend that long each day in the snake-fields.

The second person I met was the ageing mother-in-law of lovely Eleni. I was wandering down the back street that leads from the Church and where I park my car, down towards the main street and there was the old lady painting white the pavement outside her house and the kerb.

In Ulster if you are a loyalist you paint the kerb red white and blue, a Fenian paints the kerb orange, white and green and you make a statement. In Greece all kerbs are painted white making the statement “We Greeks may have buggered it all up over the pat decade but we are calm and at peace and by the way we invented democracy, literature and philosophy three thousand years ago when you were all living in trees and caves. PS Glad to see Turkey buggering it up too.”

And so I greeted her and she greeted me. Tikanis, Cala, etc. She asked how old Joshua was and I replied “Theo”. I thought of trying to explain that he and the Mrs would arrive soon but given that my Greek is as non existent as her English thought better of it. Anyhow it was a warm greeting.  And so I wandered on. The village square is packed in the evening with families as well as the normal old men chatting, drinking and eating at either Kourounis or at Miranda’s. trade is roaring. They are all familiar faces: the shepherds, the goat herder, Vangelis in his pink shirts, all the other m en who will all be called George, Nicho or Vangelis but whose names I cannot quite remember. It will be one of the three. Tikanis, Cala, Yas, Tom. I shake hands with many of them.

As ever I reflect on how few folks in Bristol I know well enough to greet them with a warm handshake. Come the weekend the Mrs who speaks some Greek pitches up. I’m not sure that will aid the conversation greatly but, of course, Joshua melts all hearts and builds bridges at once.

Up at the hovel after midnight there was another familiar face spotted. You may remember that three or four years ago I befriended a small black and white kitten up here by giving it milk. It has been a periodic pleasure in subsequent years to see my old friend, now a large cat, striding purposefully across the land. Cats eat rats and snakes and as such he, or she, is most welcome here.

My room being a tad stuffy I ventured outside shining my torch ahead of me to ensure that I had no unexpected encounters. There is a slightly cooling breeze and I wanted to catch a bit of it before heading off to sleep. If I hear a noise anywhere I shine my torch in the right direction hoping to spot what approaches. I saw a brief bit of black and white but the cat darted behind a tree. I kept the torch on that tree some 30 yards away and after a short while my friend broke cover and walked, with no sense of panic, off towards the snake fields. Happy hunting comrade cat.