Photo Article from the Welsh Hovel: The second orchard is just starting to take shape

I already have one orchard at the Welsh Hovel. You have seen it numerous times, underwater, as it runs along the banks of the River Dee behind the formal lawn and the farmyard. The trees there produce vast numbers of cooking apples and, as you can see in the first couple of photos, we will have another glut this year. With five or six trees, if anyone fancies some of these apples, and wants to pop by, be my guest. However I have now spent a lot of time planting new fruit trees.

There is a line of cherry trees in the land running alongside the lane down to the Welsh Hovel. This was formerly known as the jungle but has now been reclaimed in full. It still contains an old pear tree, a holly tree, a damson tree and yet another cooking apple tree but all else was cleared and I shall bring you photos of what I am planting now, in a week or so. But I started the replanting around Christmas with a line of cherry trees along the edge of the patch by the road and two of them have yielded very small cherries this year. The first real crop will be next year or the year after but the main point is that all the trees have survived and are now flourishing. 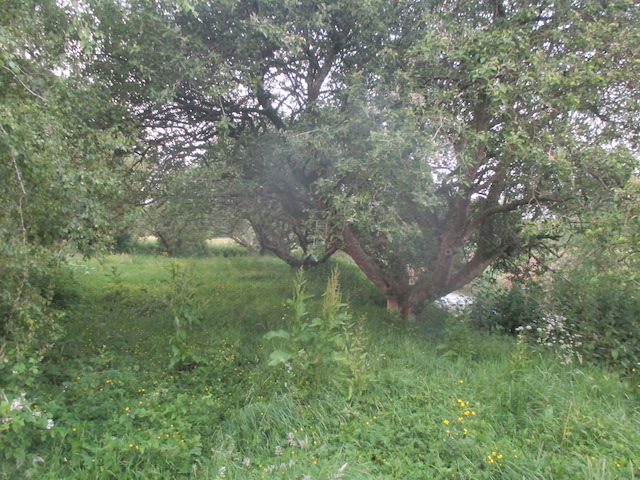 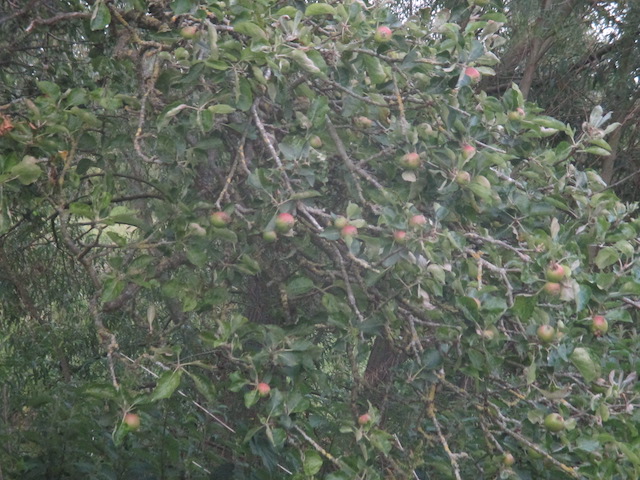 Next to what was the jungle there was a small field which leads into a bigger upper field where one day there will be goats. That is a 2022 project. That small upper field was covered in grass and weeds six foot high in places this time last year. At its far end, grass turned to nettles and ferns covering, inter alia, an old chicken shed and what is now the strawberry patch. Right now it contains 106 plants. My aim is to make that 202 by the end of next week and also to harvest the first fruit. You can see the old chicken shed at the end of the strawberry patch in the first photo below and that also shows the nearest row of new trees I have planted: two figs which will, I hope, hit two yards high and three pear and plum trees.

The next photo shows all three rows. There are two other trees among the total of 22 which will be a bit smaller: a couple lof crabappales which are good for cross polination but might also provide something for crabapple jelly when I can get around to it.They two will end up at two yards tall, maybe a bit more. The rest of the trees are equally divided among six types of edible apple, three of plum and two of pear. Those 18 trees should eventually reach four yards high.

The good news, as you can see if you look closely, is that they are growing. At least half a dozen are now my height or taller. And also, much to my surprise, as I only started planting in late March, one of the plum trees, two apples and both crabapples also have a few fruit growing on them. I am not sure if they will be edible this year but, God willing, it looks favourable for a 2021 harvest. 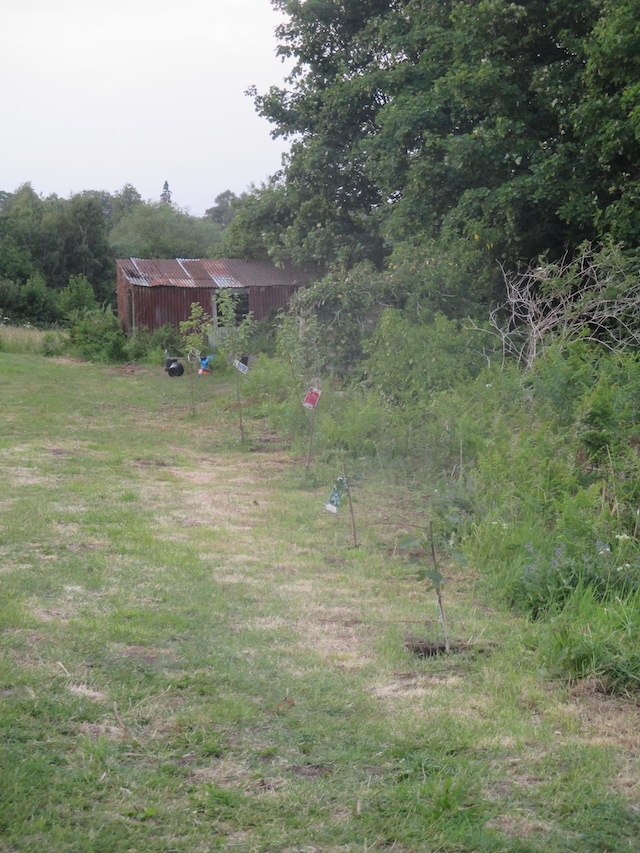 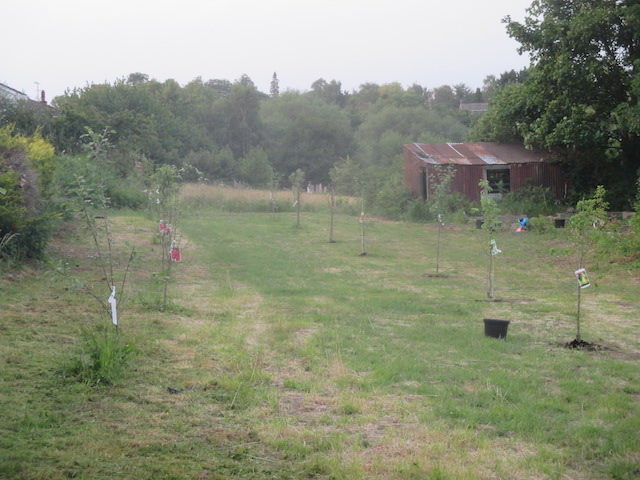 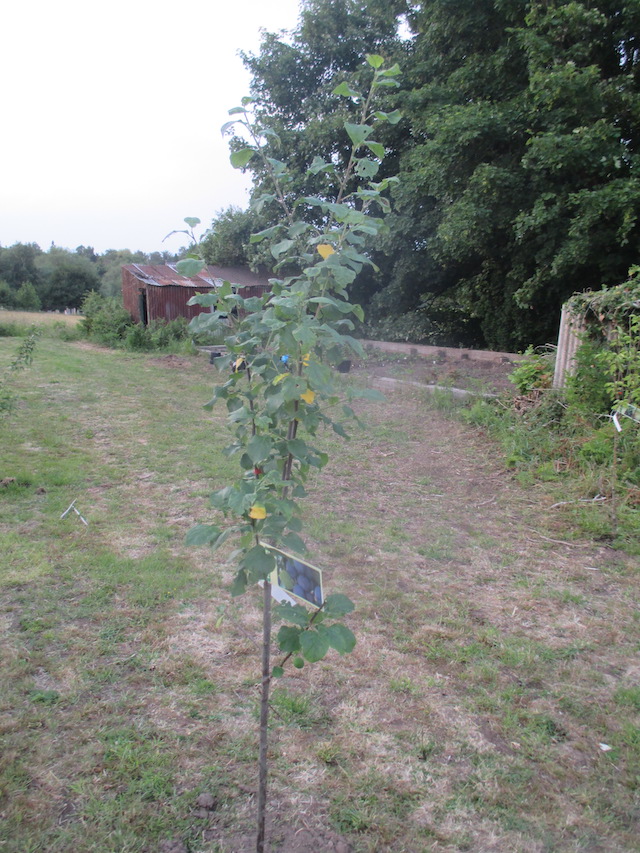 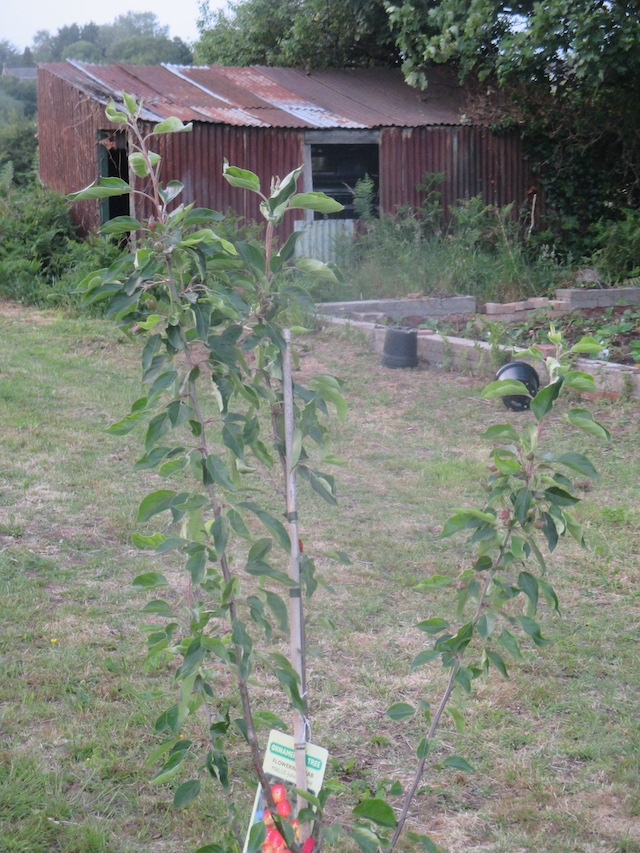 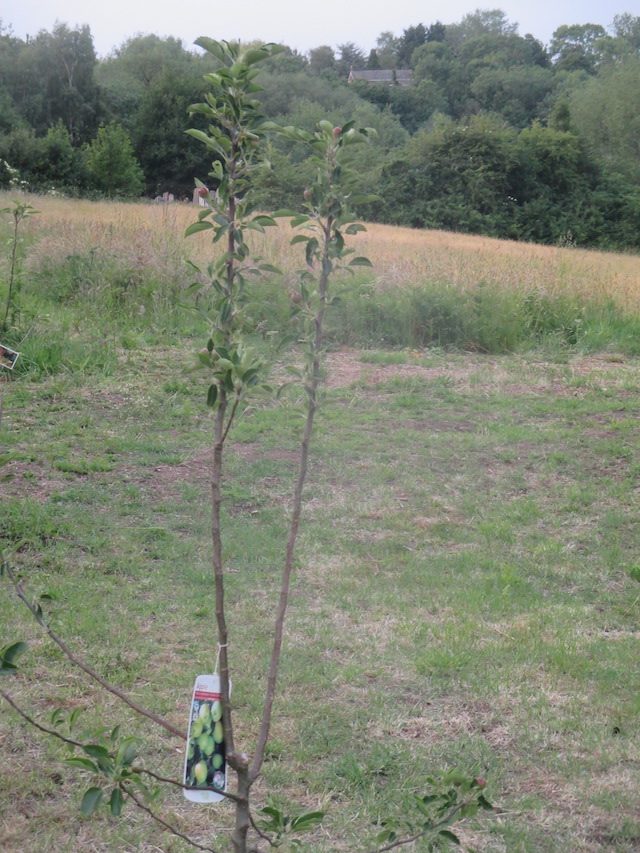 The final photo is of my newest addition, the second fig with a large old corrogated iron barn in the distance. That barn used to be for tractors and could house two. These days it is the storage point for asbestos before it goes to the dump. About 25 yards long it lies at the house end of the former jungle. One day, when the jungle is a fully functioning vegetable and fruit bush garden, I will dismantle it and replace it with a polytunnel. But that is, I suspect, a 2022 project. For now its the strawberries, orchard and vegetable patch of which the first photos will be taken next week. 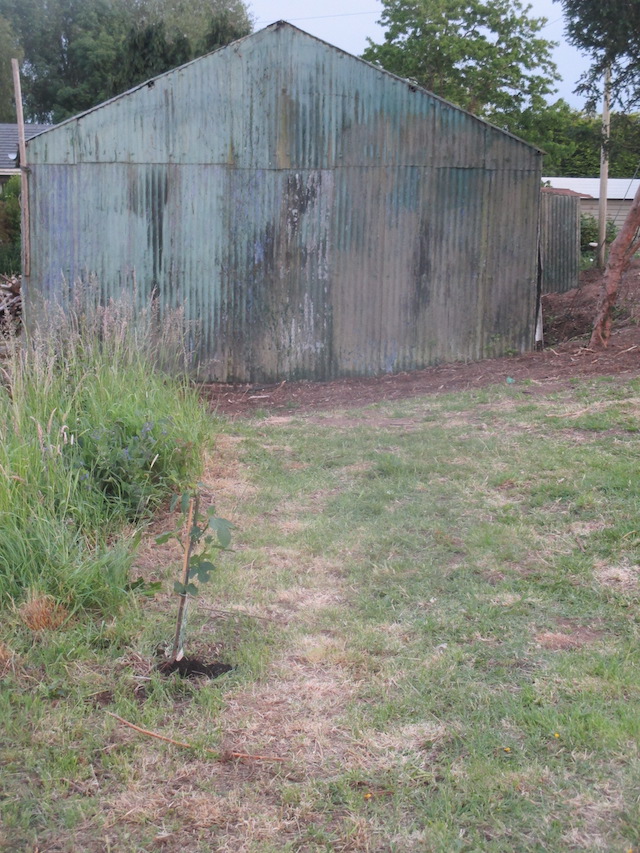