Mayor Khan says that thanks to Covid and the wicked Tories front line services in London are threatened by a funding crisis. So natch, what do you do about it but organise a virtual conference on the slave trade and looking at what it means for today’s society. This sort of thing might appeal to a few middle class intellectuals but I suspect that most ordinary Londoners, black or white, would rather have the cash spent on those threatened front line services. But it gets far worse because evil Sadiq is once again rewriting history as is his wont.

I have picked him up on this before in relation to slavery but also to the struggle for LGBT rights where he clearly attempted to create fake history.

If one goes to the booking page for Sadiq’s conference “Remembering the Transatlantic Slave trade and its Abolition” HERE you will find it instructive.

Who were the key folks responsible for the abolition? British Quakers I suggest. Perhaps William Wilberforce, with whom I share DNA? Or maybe, after the 1807 Act was passed the Royal Navy, at a quite stupendous cost in men and money (£2 billion and 2,000 lives) which spent 30 years forcing other European nations to follow the British lead in ending Transatlantic slaving. For that act many should be thankful that we can sing Rule Britannia, Britannia Rule the Waves although, I see that the BBC wish to cut that song from the Proms lest it offend anyone. #DefundtheBBC

Oddly as Sadiq spunks taxpayers cash on remembering the abolition of Transatlantic slaving and honouring those responsible the conference page is Quaker, Wilberforce and Royal Navy free. I suggest that is because they have no part in what the conference terms “black history”.  It may irk Sadiq that these folks were all white but to deny that they had critcal, if not dominant roles in abolition is just a wilful deception. Omission, in this case, is as bad as an outright lie.

But this is fake history that, once again, Khan seeks to create. Britain should be ashamed of its role in slavery. But it should also be proud of its lead role in abolishing it. A true historian would discuss both side of the coin in full. But Sadiq seeks to rewite history and create a false narrative.  Once again I find myself thinking of 1984 as I ponder the actions of London’s sad little Mayor.

“Every record has been destroyed or falsified, every book rewritten, every picture has been repainted, every statue and street building has been renamed, every date has been altered.  History has stopped.” 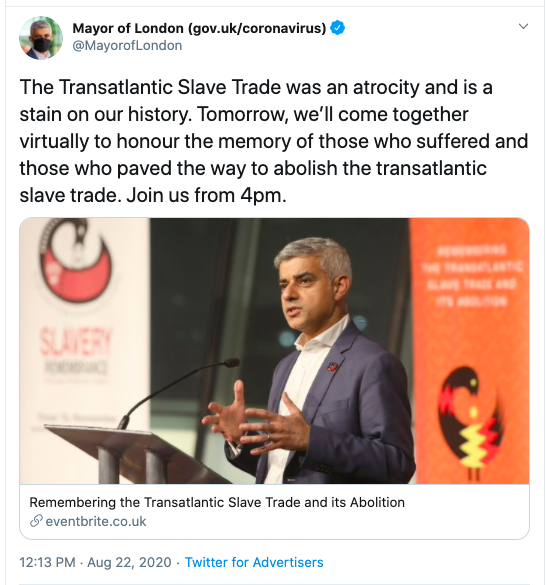