You may remember that at Manchester Airport we met up with our friends from the Mani, the Guardian-reading, lunatic, mask jihadists L&G.  They assured us that when arriving in Greece, they would be isolating in order not to spread any British germs to the Mani and so it was a while before we saw them, in a socially distanced manner, in the Kambos restaurant formerly known as Mirandas.  They are a thirsty couple and, even from a distance, conversation flows freely.

Though they deem me a fascist as, in their world, is anyone to the right of Keir Starmer, we do have some things in common. For reasons I cannot remember, they were good friends with the late Norman Stone, the infamous right wing historian. Norman stole the heart and the hand of the second wife of Uncle Chris Booker and when I was at Oxford my grandmother would sneak up ostensibly to see me but actually to stay with the Stone family. So I dined there a couple of times and thought Norman a top bloke. So we can talk about Norman and G and my wife are must be the only two folks in our part of Greece whose second language is Swedish.

L tries to persuade me of the errors of my views but there is about as much chance of him succeeding as of me persuading him to join the Ayn Rand Society or of me getting lucky with Cheryl Cole. I think we know where we stand but they are a charming couple and we Hellenophiles always have a bond. Anyhow, unlike most Brits, L takes part in the olive harvest and that is another point in his favour.

And so it was arranged that we would head up to their home village of Vorio for dinner on the day after the departure of Uncle Johnny. Ahead of that, we swam in the pool and sat reading inside. The idea of traditional Greek houses with their thick stone walls is that they keep the heat in the winter and in summer are relatively cool. It works. 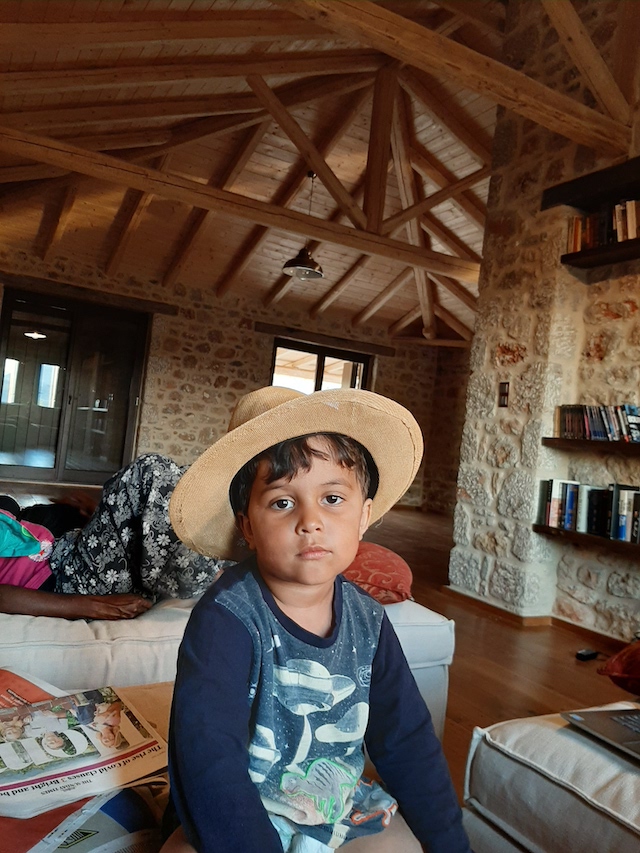 Sadly my camera failed me in Vorio, a tiny village which is a 20 minute drive up into the mountains from Kambos. The road is one hairpin bend after another and driving back in the dark is not that much fun. Thus a meal with L&G in their village is, for my part, not as boozy as it might be in Kambos.

There is one taverna in this tiny village and it is booze only for most of the year. But in the summer as folks come back from Athens to family houses, the back yard becomes a humming restaurant. The food is excellent but it is the view that stuns. I do promise a photo for the next time I’m there. For Vorio is perched on the side of the Rindomo Gorge. You can see up into the high Taygettos where it starts. In the winter, there will be snow in the small village a bit higher up. And looking the other way you can actually see the sea, a view denied you in Kambos.

On the road from Kambos down to Kalamata, three bridges cross the gorge, one from the 1850s, one from the 1960s and a more modern one. It was underneath the middle one that two bodies were dumped in my first year in Kambos – this is the murder gorge.  The views either way are amazing.

It was agreed by Joshua that L&G would come for a swim with us the next day back at the Greek Hovel and we drove very slowly home, taking one hairpin at a time, the journey livened up by sightings of numerous martens and a fox.