Of course Black Lives Matter. This is a mixed raced household so why would we think anything else? However, as I noted at the weekend, the Black Lives Matter movement has fallen from popular grace and is now overwhelmingly seen as increasing racial division by both white and BAME folks.  As I noted then, there are those last redoubts who seek to hide inconvenient truths. The teaching unions and the school system is one redoubt. So too are the Marxist Madrassas, such as Manchester University. Also doing its bit is the National Trust. But the strongest supporter is, of course, the BBC.

With more and more folk refusing to pay a license fee for the out of touch broadcaster, the BBC ploughs on pushing its woke agendas. And thus I bring you a gem from its website in which it talks of BLM fighting to change history. That is not in the Basketball England sense of changing history but in pushing the idea that the BLM organisation has actually made the world a better place. 77% of us who have a view disagree with that statement. Two thirds of BAME folk disagree with it. The idea that BLM has won as the BBC suggests is ludicrous when the vast majority of the population is clearly revolted by the organisation.

But, in a way that would make its former employee George Orwell proud, the BBC believes that if it says something often enough we plebs will see the error of our ways. Eventually we will agree with it and understand that Big Brother loves us and knows best because, as Brexit showed, we oiks are really not smart enough to understand big issues as the left leaning Metropolitan elites do. In that view it is mistaken and this article below is just one in a long line of reasons to #DefundtheBBC. 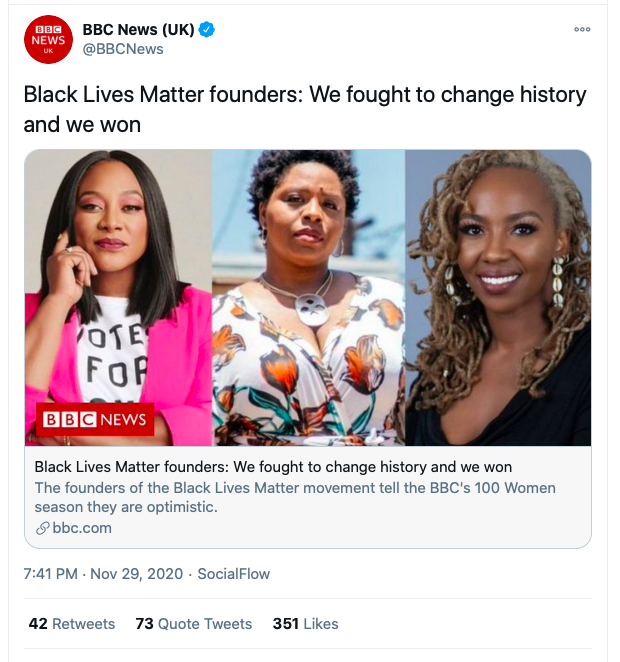