Pity Steven McKellen, his case of Brexit Derangement Syndrome is severe: he knows just how stupid, racist and unworthy of voting you are

In these last days before the UK confirms how we leave the EU, many of those on the losing side of the referendum in 2016 are suffering recurring bouts of Brexit Derangement Syndrome. Pity folks like Steven McKellen for he is not well. But at least he knows why his side lost.

It seems that we 17.4 million were all racists and thick nationalists. Only folks like him are clever enough to understand all the issues and the rest of us should not be allowed to vote. This innate belief in the moral and intellectual superiority of the liberal elite is a classic symptom of BDS and it seems that the R rate of outbreaks of this disease in places such as Oxford, Bath, the leafier bits of London and in twitterland is rocketing.

We simpletons in the boonies who still believe in unfashionable things like national sovereignty, a Police force that fights crime and in God should perhaps pray for folks like Steven this Christmas as their symptoms get more pronounced 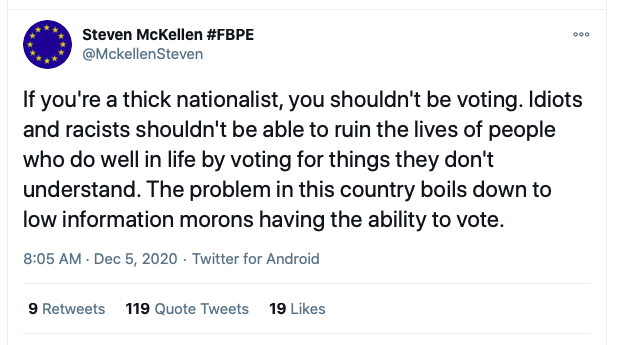